The Human Costs of a Corrupt System

by Jesse. Jesse’s Cafe’ Americain According to investigative reports that appeared in Der Spiegel, the New York Times, BBC, and Bloomberg News from 2010 through 2012, Blankfein, now Goldman Sachs CEO, Cohn, now President and COO, and Loudiadis, a Managing Director, all played a role in structuring complex derivative deals with Greece which accomplished two things: they allowed Greece to hide the true extent of its debt and they ended up almost doubling the amount of debt Greece owed under the dubious derivative deals. Wall Street On Parade, Goldman Sachs Doesn’t Have Clean Hands In the Greece Crisis “Antidemocracy, executive predominance, and elite rule are basic elements of inverted totalitarianism. Antidemocracy does not take the form of overt attacks upon the idea of government by the people. Instead, politically it means encouraging what I have earlier dubbed “civic demobilization,” conditioning an electorate to being aroused for a brief spell, controlling its attention span, and then encouraging distraction or apathy. The intense pace of work and the extended working day, combined with job insecurity, is a formula for political demobilization, for privatizing the citizenry. It works indirectly. Citizens are encouraged to distrust their government and politicians; to concentrate upon their own interests; to begrudge their taxes; and to exchange active involvement for symbolic gratifications of patriotism, collective self-righteousness, and military prowess. Above all, depoliticization is promoted through society’s being enveloped in an atmosphere of collective fear and of individual powerlessness: fear of terrorists, loss of jobs, the uncertainties of pension plans, soaring health costs, and rising educational expenses.” Sheldon Wolin 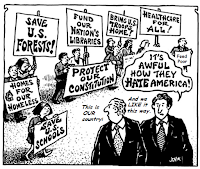 The ECB and the Fed stand ready to bail out any financial institutions affected by a Greek default. Anyone, that is, except for the general public, commonly known as the 99%. They no longer have a voice, or a choice. Today was the end of the 2nd quarter. Fed Vice-Chairman Stanley Fischer celebrated The Recovery™ today at a conference in England for African Central Bankers, saying that the US is ‘almost at full employment.’ Morals matter. People matter. Justice matters. Truth matters. Time has a way of balancing accounts. Continue Reading>>>