US, NATO Powers Intensify Preparations for Nuclear War in Response to “Russian Aggression”

By Thomas Gaist, Global Research The NATO military alliance is preparing to implement a more aggressive nuclear weapons strategy in response to alleged “Russian aggression,” according to NATO sources cited by the Guardian Wednesday evening. Proposed changes include provisions for greater involvement of nuclear forces in ongoing NATO military exercises along Russia’s borders and new guidelines for nuclear escalation against Russia, according to the NATO officials. The alliance’s nuclear doctrine has been the subject of quiet, informal discussions “on the sidelines” of the ongoing NATO summit. The new policies will be formally articulated and confirmed at an upcoming conference of the alliance’s Nuclear Planning Group, which was rescheduled for an earlier date this week as word got around about the secretive planning. “There is very real concern about the way in which Russia publicly bandies around nuclear stuff. So there are quite a lot of deliberations in the alliance about nuclear weapons,” an unnamed NATO diplomat told the Guardian. The claim that discussion about a revision of nuclear weapons policy is in response to Russian aggression turns reality on its head. In the aftermath of the US and NATO-backed coup in Ukraine last year, the major imperialist powers have engaged in a relentless militarization of Eastern Europe, including the establishment of a rapid reaction force of 40,000 troops. This week, US Defense Secretary Ashton Carter announced that the US would permanently deploy tanks, military vehicles and other equipment to countries bordering Russia. There are also ongoing discussions about directly arming Ukraine, beyond the extensive assistance the right-wing government already receives. NATO is now planning to respond to any attempt by Russia to maintain or counter US imperialism’s aggressive moves in Eastern Europe with even more massive military response, including nuclear weapons. An indication of the thinking of NATO strategists was provided by a report in theFinancial Times. In the event of a conflict involving one of the Baltic countries, “Russia might…accuse the alliance of escalating the conflict and threaten to use intermediate range nuclear weapons.” The Times quotes Elbridge Colby, of the Center for a New American Security (CNAS): “NATO does not need a total nuclear rethink. But it needs to be realistic about how it would respond and willing to show Putin that he would not get away with it.” This scenario builds on allegations from the US that Russia has violated the Intermediate Range Nuclear Forces Treaty (INF), allegations that the Russian government has denied. US officials have stated that the Pentagon is preparing to launch preemptive attacks against missiles or other targets in Russia, including with nuclear weapons, in response to Moscow’s alleged violation of the treaty. The announcement of major revisions to NATO’s nuclear strategy came just days after the publication of an extensive report, “Project Atom: Defining US Nuclear Strategy and Posture for 2025-2050,” by the Center for Strategic and International Studies (CSIS). The main portions of the report were authored by a career US government strategist and senior CSIS analyst, Clark Murdock, a man who previously worked in high-level strategy jobs at the Central Intelligence Agency (CIA), the Department of Defense (DOD), the US Air Force and the National War College. The report included contributions from a large team of researchers and experts, including panels from the CNAS and the National Institution for Public Policy (NIPP). The thrust of the CSIS analysis is that the US must make its nuclear arsenal easier to use in a war with Russia, China or some other power. The military must adopt “a US nuclear strategy designed for twenty-first century realities,” based on new generations of tactical warheads and delivery systems. 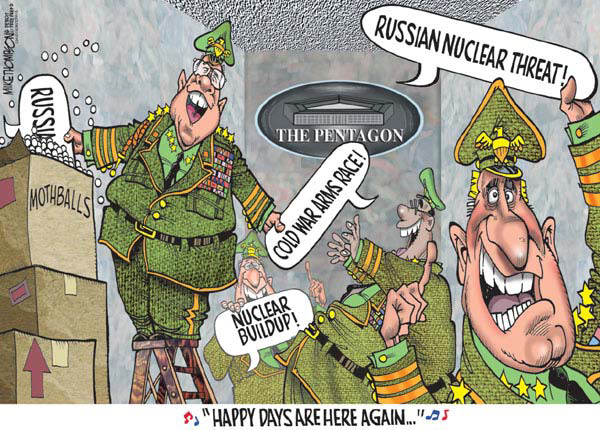 More advanced tactical nuclear weapons will enable Washington to threaten and launch small nuclear wars, without being “self-deterred” by concerns that its actions would lead to a nuclear holocaust, the CSIS report argues. “The United States needs to develop and deploy more employable nuclear weapons,” the CSIS wrote, including “low collateral damage, enhanced radiation, earth penetration, electromagnetic pulse, and others as technology advances.” Such advances, the report argues, are the only way to counter the erosion of American technological superiority by the growth of the Chinese and Russian nuclear arsenals, together with the addition of as many as nine new governments to the “nuclear club.” Under the “Measured Response” theory advocated by the CSIS and Murdock, these types of highly mobile nuclear strike forces could engage in “controlled nuclear operations,” firing “low yield, accurate, special effects” nukes against enemy targets without leading to a full-scale nuclear war. By “forward deploying a robust set of discriminate nuclear response options,” the US could launch tactical nuclear strikes “at all rungs of the nuclear escalation ladder,” Murdock wrote. Such “small-scale” nuclear conflicts would inevitably claim tens, if not hundreds of millions of lives, even assuming they did not escalate into a global nuclear war. The continental US, according to this theory, would be protected from the consequences of regional-scale nuclear warfare by the deterrent effect of Washington’s huge arsenal of high-yield strategic weapons. Any “controlled” nuclear conflicts started by the US government, moreover, would not involve nuclear operations targeting or launched from North America. “The US homeland would not be engaged in the US response to a nuclear attack on a regional ally,” the CSIS wrote. In barely veiled language, CSIS is suggesting that the US should utilize allied and client governments as staging areas and arenas for “controlled” atomic warfare. As the product of collaboration between an extensive network of ruling-class policy theorists, such proposals are extremely ominous and represent a grave warning to the international working class. There have been other calls for a significant expansion of US nuclear weapons capacity. In comments to the Atlantic Council earlier this week, US Congressman Mac Thornberry, the chairman of the House Armed Services Committee, called for a “national conversation about building new nuclear weapons.” “That’s something we haven’t been able to even have a conversation about for a while, but I think we’re going to have to,” Thornberry declared. Late last year, the Obama administration announced plans for a $1 trillion, three-decades-long upgrade of nuclear weapons capability. In the writings of the CSIS and the other discussions within the state apparatus, there is a degree of insanity. The strategists of American imperialism are coldly calculating the best tactics for waging and winning nuclear war. Yet this insanity flows from the logic of American imperialism and the drive by the financial aristocracy to control—ever more directly through the use of military force—the entire world.