The NFL pat downs. The NFL and every other sports franchise have signed agreements with DHS to allow their facilities to be used as detention facilities. The concept of FEMA camps is becoming an international phenomena.

The Construction of Mass Burial Sites

Along these lines, I have received two emails in regard to some very disturbing developments.

My brother-in-law is an Army Reservist in Texas. His last drill was somewhere in Ohio where his unit was trained on operating brand new massive bulldozers. They were digging holes large enough to “bury tanks”. I suppose they were told that’s what the holes were being dug for but it must have struck him as odd or he wouldn’t have mentioned it to my sister. Is there some reason that the army buries tanks that I’m unaware of? If not, what else might these large holes be used for? Also, the location of the drill was changed at the very last minute from Southern California to Ohio.
I wouldn’t want my sister to know I e-mailed this information to you; however, It struck me as odd and goes right along with a lot of the accounts I’m reading in your articles. I appreciate very much what you do. May the Lord watch over you, Brother.
Sincerely,
Cara Hummel

Cara’s question and topic is not about burying tanks, it is about burying massive amounts of dead bodies as indicated by the following email I received on June 17, 2015.

Hello Mr. Hodges
My brother is a member of the Michigan Army Reserve that has trained near a FEMA camp known as Camp Grayling. His unit functions as a security unit and has trained for duty at Guantanamo  i the past.
He was home this past week for three days. He told me that he wasn’t sure he could go back because they were constructing mass grave sites by bulldozing the ground northeast of Camp Grayling. My brother reads your site, Steve Quayle and the Hagmann’s and Alex Jones. Because of this, he immediately knew what he was working on.  He is shaken to his soul and does not know what to do. Nobody in his unit has said a thing and my brother is afraid he is on his own with what’s happening.

Please keep up the good work because you are waking up people. I just fear that you are not waking enough of us sheep up.
May God be with you,
Beth

Discussion of FEMA camps, American style in the UK is spreading like wildfire. As a case in point, consider the following discussion thread on the David Icke website.

FEMA type camps in the UK?

I was thinking about the FEMA camps that have been built in America, and wondered if we had something similarly secret here in the UK.

I realised then that we have been brought up with the idea that camps with perimeter fencing and everything you need inside it are a good place to be……..think Pontins and Butlins.

After they have been taken over by the govt, are we going to led to believe that these camps are the best place for us in the event of a catastophe of some sort and us willingly taking up residence…

FEMA camps are being openly discussed in the UK according to the local media. The people in the UK are paying close attention to Jade Helm and what we saying about this as any discussion of FEMA camps begins and ends with the Jade Helm “exercise”.

Contents from the following email was sent to me several days ago, twice by different people and was also posted the following on Godlike Productions.

Is Jade Helm 15 taking place outside the United States? The reason I ask is because I have, for a long time, wondered WHY a local shopping mall near me on the edge of town, (In the UK) … had what looked like 3 strange little towers on each corner. They seems to serve no purpose because they had shuttered windows on each 3 sides which were always closed, never used. Almost looked sealed, and decorative.

The penny dropped the other day. After watching all the Jade Helm/ Wal Mart vids on youtube …. I realised there was a good possibility that this mall near me could be used as a holding centre or detention camp of some sort, like the Wal Marts in the US.

The 3 three little towers are positioned so that they overlooked all the car parks and grounds on all sides.
All that is needed is a razor wire fence and voila – the mind boggles…

Another strange thing ….. there is another supermarket on the opposite edge of town which is a weird shape with a gold roof shaped like a pyramid or triangle from the air.
It has only recently finished being constructed.
I asked a workman why the cafe within the supermarket was so badly located and designed and pointed out other design flaws which the general public were talking about ….. to which he replied, ” Oh none of that really matters – they, Asda, only have the use of this building for 3 years – then – who knows? “ 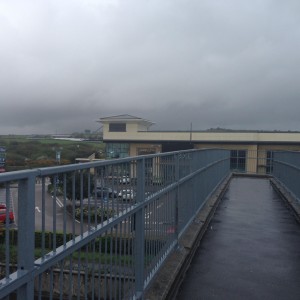 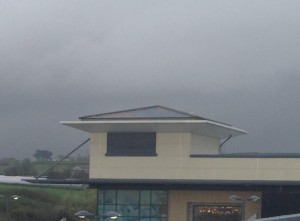 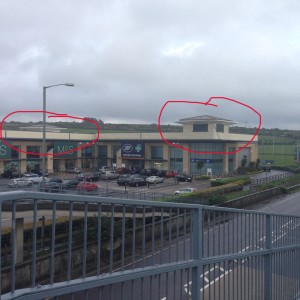 FEMA Camp On the Canadian Border

As I had previously reported on the makeshift FEMA type camps in the UK that are springing up around the country, we are now seeing the same development on the Canadian border with Washington State.

This is a stunning development and there can be no mistake about what we are looking at with these photos. Before examining the photos, please take serious note that the buildings we are looking at are abandoned and have been for quite awhile. There is absolutely no reason for any construction of the type we are seeing to be going on.