The Need for Emergency Communications

by The Petite Prepper, SullivanSurvival

Scenario 1: You are having an average commute on the way into work when….BAM…you get a flat tire…and wouldn’t you know it?   Your spare is flat too!

Scenario 2: You are aware a severe storm watch has been issued for your area, and you can see in the distance that dark clouds are heading your way.  You are watching the TV for updates when….the cable goes out.

Scenario 3:  You and your buddies are four-wheeling in the backcountry.  All is fun until one in the party hits a big rock and flips his ATV.  He needs medical attention.  You reach for your cell phone….but no signal.

Scenario 4: A large earthquake hits your area.  Infrastructure has largely been damaged, and, for the moment, is inoperable.  You are panicked to get a hold of everyone in your family to conform they are O.K.  You also feel the need to contact at least one relative outside your area to let them know you’re still alive.

Do you see a pattern?

As the degree of emergency increases, so does the need for communication.

Also…that cell phone you depend upon every day?  Well…it can only take you so far.  In greater emergencies, you will need alternative forms of both one-way and two-way communications.

Let’s look again at the first scenario.  This is an everyday, “vanilla-flavored” emergency.  You possibly passed someone with a flat tire on the way to work this morning.  Luckily, this is a job for your EDC communications: your cell phone.  Assuming your phone is charged, you could place whatever phone calls would be necessary to get the assistance you needed to get on your way again.

Recommendations to be prepared for Scenario 1: This is the kind of event that we all use as justification for having a cell phone anyway.  You may as well put it to use.  The only other thing I would add to your EDC (Every-Day Carry) is some kind of additional power source to charge your phone if it was dead and you found yourself in a bind. I would suggest always having on hand a portable power bank.  Of course, this is all assuming that you live where a cell phone signal is prevalent.  If not, I would suggest that you have an alternative form of two-communications with you.

Returning to our scenarios, Scenario 2 is also a common situation.  The degree of severity you are likely to face depends heavily on your location, but most locales will see severe weather at least some of the time.  The problem in this scenario results from dependence on regular media for information.  If the cable, satellite feed, or even power goes out, do you have another source to turn to for news updates?  Here is where the need for an emergency radio comes into play.  Every household should have one as part of their emergency preparedness plan.

Recommendations to be prepared for Scenario 2: A radio which is powered by batteries, solar cells, or even hand-crank, can be a great go-to source for information if any of the mentioned possibilities occur.  I would especially recommend a unit that doubles as a weather radio, which is able to pick up any storm-related news, watches, and warnings for your area.

There are a number of small portable radios on the market that could also be taken with you if you feel you need to “bug out.”  Some are even capable of picking up shortwave signals which can give you access to information from a larger region than what your standard AM/FM radios are able to do.

Although the first two scenarios could turn into more serious emergencies, it is the third scenario where one could see that the need for communication could mean life or death.  If an event arises, and you were where there was no cellular signal present, what would you do?  This is when other forms of two-way communications are needed.  Thankfully, there are several options, and as one researches those options, they should see what would be the best choice for them.

The most common of these choices are known as FRS (Family Radio Service) radios.  These are available at many sporting good and discount retailers.  Better yet are GMRS (General Mobile Radio Service) radios which have a wider range and more power than FRS radios, (although you do need a license to use GMRS.)  Both FRS and GMRS radios are the “walkie-talkie” units that most people are familiar with.

In the scenario mentioned above, coordinated use of such radios would increase the likelihood of being heard, and therefore getting help.  As for other possibilities, satellite phones would also work well in this case.  The disadvantages, however, are that they are expensive to own and to use.  Another option, (and my favorite by far,) is amateur (ham) radio.

Although one needs a license to use ham radio, these devices have the greatest range and flexibility in ways to communicate.  In the scenario described above, with a ham radio, one would likely be able to make contact with someone in order to secure the help that they would need. 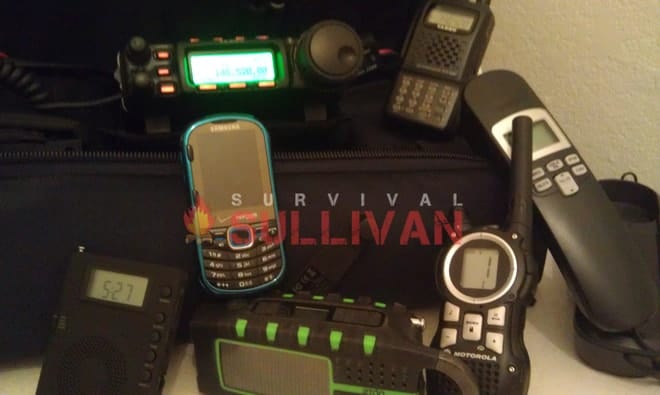 Recommendations to be prepared for Scenario 3: Whatever you do, have something as an alternative to cellular communications.  As I mentioned, there are many options, and one does not need to spend a lot of money.  FRS and GMRS radios are very easy to obtain and operate, and satellite phones also may be a good option for you if you find yourself frequently in very remote places.  However, my personal recommendation is to spend a little effort and get a ham radio license.  The advantages of ham radio are a story worth telling on its own.   If you doubt this, read on…

Scenario 4 is one where your world just fell apart without notice.  Luckily, it is not your everyday type of emergency.  However, not of one of us can guarantee we will never face a life-changing event.  If not an earthquake, it could be a catastrophic tornado, a strong hurricane, an extreme health epidemic, or even the breakout of war.

The infrastructure we rely on day to day is fragile, and there are possible events that could instantly transform the landscapes of our lives.  These are the events which we never hope to realize, but ones we prepare for because we cannot rule them out either.  For the sake of argument, the fourth scenario I chose to illustrate was an earthquake, although you could fill in the blank with any extreme disaster.

In the case of a large earthquake, the area’s infrastructure would have most likely taken a considerable hit. Undoubtedly, many would try to use their cell phones to contact their loved ones to see if they’re O.K.  The problem with this plan is that, (assuming there are cellular towers still working… it would be likely many of them would not be,) the towers could not take the signal overload that would result from too many people trying to use their phones at one time.

There is only so much bandwidth out there.  Surely, you will have those who are updating social media, sending pictures, making calls, etc.  Text messages are the cell phone communications most likely to reach their intended recipients, but again, this is assuming that the cellular towers are even functioning at all.  Landline telephones are usually more reliable in an emergency, but damage to the existing infrastructure could affect those too.

Besides phones, some people will try to use FRS of GMRS radios, but in the case of each, they only have a limited number of channels which could be used for communications.  So those channels are also in danger of being overloaded if a serious wide-spread emergency was to occur.  What about CB radio?  This public radio service is a good option, and no license is required.

There are more communication channels than the FRS and GMRS radios, and the distances that CB radio can cover are also greater than both.  However, your range is limited to your area.  What if you need to contact someone outside the region?  Here is where ham radio shines.  There are no geography limits.  With ham radio, one could contact those loved ones in the area, (assuming they also are hams, or at least know a ham,) and one could also reach out and contact someone outside the region to let them know he or she is alive and well.

This, of course, is dependent on the use of different types of ham radio equipment and techniques to achieve this.  For example, one can send emails over ham radio using the right equipment to anyone with email access.  Also, the amount of frequencies available for ham radio to use far outnumbers the frequencies allotted to the other radio services.  One could even place a phone call…all by radio.  The truth is, there are more options and methods of communicating available to amateur radio, and it is not dependent on the community’s infrastructure.  As long as you have your own power source, you can operate.  This is why governments and communities all over the world have turned to ham radio in the event of a serious emergency.

Recommendations to be prepared for Scenario 4:  First, and foremost, have an emergency plan on how to contact those you would need to reach.  Second, depending on your circumstances, determine what kind of alternative communications you would use if a serious emergency occurred.  Third, gather the equipment needed to execute your plan and practice!  Fourth, seriously consider becoming an amateur radio operator.  It is easy to obtain a license, and you can get started with little cost.  I recommend this because the options available to you as ham would give you an arsenal of communication possibilities if you found yourself in a significant emergency.

In any case and for whatever kind of scenario, make emergency communications part of your plan to be prepared.  It is likely that at some point you will need it.