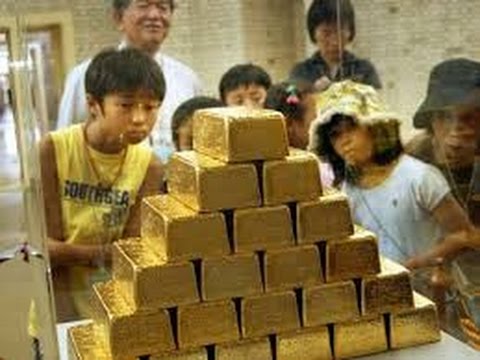 We have another convoluted and confusing gold article from Bloomberg’s Nicholas Larkin to share with you today. You will recall that Nicholas Larkin is the writer who last year praised the new silver fix as a great way to “add more transparency” to the silver market.

In his June 19, 2014 article titled New Silver Benchmark Seen Heralding Gold Fix Revamp Larkin also referred to the silver market as being a “$5 TRILLION market“. That surprising claim puzzled many of us given that the net value of all silver mined in one year is no more than $12 – $17 billion at current spot prices, with only 700-800 million physical silver ounces mined annually.

Today Larkin is back, this time with co-author Eddie Van Der Walt. The two are claiming that a move to a gold standard by China would require a gold price of $64,000.

A move to a gold standard in China would require an exchange rate of as much as $64,000 an ounce, 50 times bullion’s price now, according to Bloomberg Intelligence.

A traditional gold standard, in which the precious metal backs the currency, is basically impossible at current prices due to the amount of metal needed and there’s no evidence the sixth-biggest bullion holder will adopt one, Bloomberg Intelligence said in reports published Wednesday. Any attempt probably would involve new technologies and depend on the ratio of what is backed, it said.

We’re not sure who ‘Bloomberg Intelligence’ is or from where they are gathering this “intelligence”, but it would be helpful if they dealt with some of the commonly known facts about China’s gold hoard which we cover daily here at SGT Report.

When Larkin and Van Der Walt claim “A traditional gold standard, in which the precious metal backs the currency, is basically impossible at current prices due to the amount of metal needed“, one wonders what in the world they are trying to say. Are they referring to the total amount of Dollars in circulation worldwide? Are they referring to the total fiat money quantity (FMQ) which we have discussed at length with Gold Money’s Alasdair Macleod? Regardless, a $64,000 per ounce gold price itself would be the direct result of re-pricing the oceans of fiat in circulation to the relatively tiny amount of physical gold.

Chinese policy makers are trying to establish the yuan as a reserve currency, and backing it with gold would help attract foreign capital inflows, the Bloomberg research unit wrote. Theoretically, to create an exchange rate of one ounce of gold for every $64,000, the country would need about 10,000 metric tons of the metal, they estimated. That’s nine times the nation’s official holdings and about 6 percent of all the bullion ever mined globally.

Once again we see obfuscation of the facts from the mainstream mockingbird financial publication Bloomberg.

First, the authors claim that 10,000 tons of gold is NINE TIMES more than China’s “official holdings”. While that may be true, certainly Larkin and Van Der Walt are aware that China now likely holds far more gold than its officially reported total of 1,054 tons. In fact, unless Larkin and Van Der Walt are entirely incompetent imbeciles, they must be aware that even the mainstream mockingbirds at Market Watch are reporting that China is about to come clean about how much gold it really owns.

China’s “officially reported total of 1,054 tons has maintained unchanged since 2009 in data reported to the IMF. Gold mines in China — the world’s biggest bullion producer for the past eight years, with 2014 output of 452 tons — have been quietly selling some of their output to the state, possibly several hundred tons in some recent years.“

It’s curious that Larkin and Van Der Walt refer to China’s “official” 2009 gold holdings as Gospel without informing their readers of what China has been up to over the last six years! We already know that China has been hoarding gold for the last decade. China is the largest producer of gold in the world, the largest importer of gold in the world and an exporter of none. Perhaps this is news to Larkin, Van Der Walt and Bloomberg “Intelligence”.

Without bothering to fully explain the financial and monetary alchemy behind their premise of a $64,000 gold price, the writers state “to create an exchange rate of one ounce of gold for every $64,000, the country would need about 10,000 metric tons of the metal“.

It’s shocking to see a statement like that in a Bloomberg article, especially for those of us who suspect that China has already accumulated 10,000 metric tons of gold, and possibly a lot more.

It reminds me of the work of GATA’s Adrian Douglas. Douglas said basically the exact same thing in 2011 as I documented in my micro-doumentary The Curious Case For $936 Ounce Silver. Douglas calculated that the Bullion Bankers like the LBMA have sold at least 45 times as much gold as they have on hand, meaning the gold price must go at least 45 times higher to regain equilibrium with the fiat in existence.

Chris Hamilton has also documented how China’s gold hoard may have easily already reached the 10,000 tons mark. As Hamilton and SRS Rocco Report published in November of 2014,“10,000 tons of gold… The math says China could have easily done it!”.

And in my October 2014 interview with Gold Money’s Alasadair Macleod DEAD BANKSTERS & CHINA’S 30,000 TONS OF GOLD”, the case is made that China may have already accumulated far more than 10,000 metric tons of gold.

In that conversation Macleod, unlike Van Der Walt and Larkin, explains how he utilizes quantifiable monetary data like the fiat money quantity (FMQ). Macleod explains, “If you look at the quantity of fiat Dollars in circulation, this is an enormous number… FMQ (fiat money quantity) in the past was growing at a fairly constant rate of 5.6% compound per annum. Ever since the Lehman crisis since they’ve been printing money, FMQ has taken off, it’s now in the process of hyperinflating.”

Our conversation about China’s gold hoard begins in earnest at the 16:30 mark, check it out. [A quick note, one monkey wrench in all of this China gold hoard speculation is that it has been recently revealed that the “mysterious Belgian buyer of US Treasurys” was China. It appears that China was not using ALL of its cash reserves to buy gold in recent months.]

Macleod says the idea that China currently holds 10,000 tons of gold may be… “wildly underestimated.”

Whatever the motivation for Larkin and Van Der Walt’s poorly written and poorly researched Bloomberg article, the truth is evident for anyone with the eyes to see and the ears to hear:

There is a great monetary reset coming. There is a day of reckoning on the horizon for the tsunami of fiat which has flooded the planet. There will be a revaluation of the gold (and silver) price that will revalue the precious metal at a price far higher than the manipulated price we see today.

Will it be $64,000 per ounce gold? Will it be “some day”, when Beijing finally “officially” announces it has somehow managed to acquire 10,000 tons of gold?? Maybe… And what happens if we find out tomorrow that China already has it?