Why “Junk Silver” Is Not Junk

Silver all but vanished from U.S. coinage in 1965. Prior to then, U.S. dimes, quarters and fifty cent pieces were made of 90% silver.

After 1964, only Kennedy half dollars contained any silver at all (though it was reduced to 40%). These coins were minted until 1970, when they too were converted to copper clad with nickel.

In the late ‘70s, I spent several years working in the grocery business in Alaska. In 1977, silver was getting ready to make its big move from the low single digits up to a bull market blow off price of around $50. Having read Harry Browne’s book titled “How you can Profit from the Coming Devaluation,” as well as the writings of his former boss, the late Jerome Smith, I was fully “on board” with this developing story.

At the check stand, I watched carefully for any silver coins a customer might use to pay their grocery bill and quickly “exchanged” them for an equal face value amount of non-silver-bearing coin from my pocket.

In one instance, a lady came in with a small stack of silver half dollars she had been using as shims to level a large aquarium. They were coated with rust from the fish tank’s frame, as well as the normal tarnishing (oxidation) that silver undergoes, and looked pretty gritty. She asked apologetically if it would be possible to exchange them for some better looking pocket change, and I was only too happy to oblige!

Way back in 1588, Sir Thomas Gresham, the financial agent of Queen Elizabeth I, observed that if two coins have the same value as legal tender, but different values in regard to the metal they contain, the cheaper-metal coin will be used to pay for things, but the coin containing more expensive metal will disappear from circulation and be hoarded. In effect, “bad money drives out good money.”

His observation was not codified until the nineteenth century, when an economist applied the term “Gresham’s Law” to the concept.

If ever there was an example of this “law” in action, what happened to U.S. pre-1965 minted silver coinage has to be it!

When precious metals’ prices were getting stronger in the late ‘70s, I would buy several hundred dollars’ worth of rolled coins from the local bank. I would remove the silver coins, refill the rolls with the correct face amount coinage, and return them, collecting quite a bit of silver in the process. After a few years of doing this from time to time, the 90% silver coins became less and less common.

Pre-1969 Canadian silver coins contained some silver, but before long these disappeared from circulation too. The last holdouts were Kennedy Half Dollar “clads” containing 40% silver (minted until 1970), which fewer people knew about.

My final effort at sorting rolls of coins from the bank was 2 years ago and it produced meager results. I spent $2,000 for the rolls, and found only two U.S. dimes, a George Washington silver quarter, and – a real keeper – a worn Ben Franklin 90% silver half dollar! Gresham’s Law drove circulating silver coins from “endangered species” to virtual extinction.

The last time I actually got a silver coin amongst my change for a purchase was at Costco over a decade ago! It is taped to my computer screen.

Nowadays, in the United States, Canada, and the United Kingdom, coins containing silver, but having no collectible value are known as “junk silver.” Of course, the word junk is misleading. Rare coin dealers started using that label back in the 1970s because the coins do not carry the hefty premiums of numismatic coins. But their silver content makes them anything but junk. 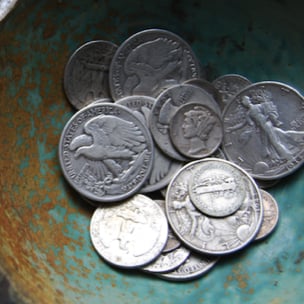 Precious metals are measured in troy ounces (oz). One troy ounce equals slightly more than 31 grams, while a standard ounce (from the Avoirdupois system based upon pounds) equals a bit more than 28 grams.

The value of junk silver depends upon how many troy ounces the coins contain. Most U.S. silver coins were made of an alloy containing 90 percent silver and for every dollar of face value there is .715 ounces of pure silver – a number which includes a small allowance for wear. So a bag of $1,000 in face value contains 715 ounces.

Today silver investors eagerly buy so-called “junk” coins because they appreciate the small denominations and the trust and recognizability that comes with official U.S. government issue coinage. These traits make it particularly popular with buyers who worry that the U.S. dollar might collapse entirely and that they will need something to barter with.

There’s More Than One Way to “Stack Silver”

Acquiring junk silver in “odd lots” offers several advantages over a larger purchase. It requires a relatively smaller up-front investment, enabling the investor to buy a little bit of metal at a time. Setting up and following through with a regular purchase schedule can, over time, create a substantial nest egg as the “silver stacker” continues to build his or her precious metals’ hoard.

A stacker wanting to know a given coin’s silver value can use an online source like this one. Just plug in the coin denomination, and its melt value based upon the day’s trading spot price is calculated. You can also enter various spot price assumptions, to get an idea of what might happen to your “test coin” under a rising silver price scenario. At a spot price of $17, the retail silver value (including premium) of a quarter is a bit over $3. At $30 an ounce, its value would be nearly $6. At $50, the quarter would be worth about $9. 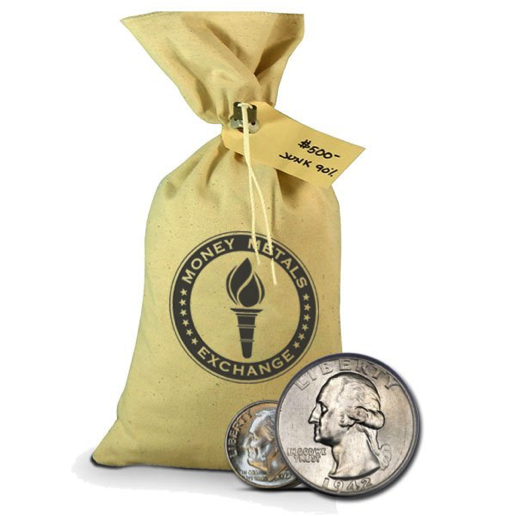 You can buy a handful of junk silver at a coin shop and increments as small as $10 face value from national dealers. It’s most commonly sold in heavy canvas bags holding face amounts of $250 – $500 each. And a full $1,000 face amount bag weighs around 54 pounds, including the copper. The dates are variable, but generally speaking, dimes, quarters, or half-dollars are packed in separate denominations.

At the moment, lower silver prices have caused premiums on this no-longer-minted-form of silver to rise as a percentage. Owners of junk silver just aren’t selling right now! So expect to pay 13% to 18% over spot for the time being, although premiums should fall when silver prices resume their climb.

Don’t let the fact that you can’t initially afford buying a full bag of “junk silver” dissuade you from getting your personal acquisition program underway. Start from whatever level you can afford and keep adding on a regular basis. As mega-basketball star and business personality Michael Jordon likes to say:

“Step by step. I can’t think of any other way of accomplishing anything.”