102 Years of Taxation: Chart Shows How out of Control the IRS Has Gotten

by Lily Dane, Activist Post With the end of “tax season” nearly a week behind us, many Americans are likely moving through the five stages of grief: denial, anger, bargaining, depression, or acceptance.

It is probably not shocking to anyone to hear that the IRS is among the most hated and feared of the government agencies (it has taken first place in many annual polls).

A quick look at the history of the income tax might provide some hints as to why we despise the agency so much.

The modern income tax began in February 1913 when Congress passed the Sixteenth Amendment to the Constitution, thanks to the administration of Republican William Howard Taft.

The Congress shall have power to lay and collect taxes on income, from whatever source derived, without apportionment among the several States, and without regard to any census or enumeration.

The first tax bill came from the Woodrow Wilson administration in 1913. Wilson made the income tax a key part of his electoral campaign (the Republican party platform of 1912 did not mention the income tax).

This chart from Americans for Tax Reform shows just how much the income tax has grown since 1913: 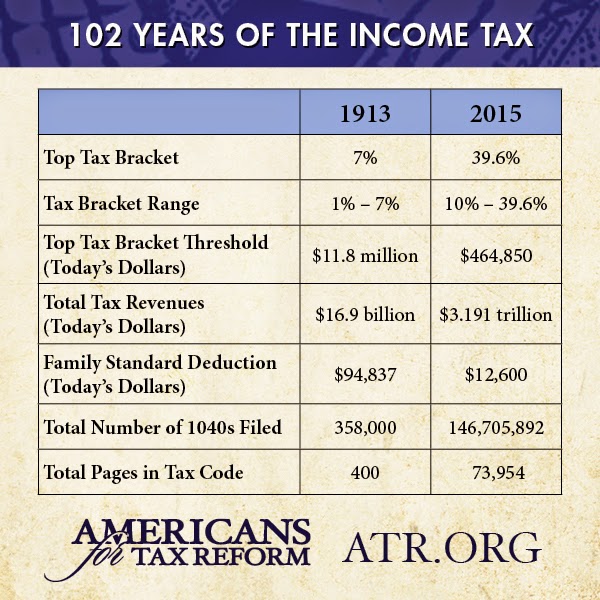 As if that chart wasn’t painful enough to read, the nonprofit Tax Foundation (a nonpartisan research think tank based in Washington, DC) has published the following findings in its 2015 Tax Freedom Day article:

Tax Freedom Day is the day when the nation as a whole has earned enough money to pay its total tax bill for the year. Tax Freedom Day takes all federal, state, and local taxes and divides them by the nation’s income.

Americans will pay $3.3 trillion in federal taxes and $1.5 trillion in state and local taxes, for a total bill of more than $4.8 trillion, or 31 percent of the nation’s income.

Tax Freedom Day is one day later than last year due mainly to the country’s continued steady economic growth, which is expected to boost tax revenue especially from the corporate, payroll, and individual income tax.
Americans will collectively spend more on taxes in 2015 than they will on food, clothing, and housing combined.

If you include annual federal borrowing, which represents future taxes owed, Tax Freedom Day would occur 14 days later on May 8.

Tax Freedom Day is a significant date for taxpayers and lawmakers because it represents how long Americans as a whole have to work in order to pay the nation’s tax burden.

The remaining 7 days are spent paying estate and inheritance taxes, customs duties, and other taxes.

Michael Hausam of IJReview reminds us that Richard Byrd, the Speaker of the Virginia House of Delegates in 1913, warned what he imagined income tax would become:

A hand from Washington will be stretched out and placed upon every man’s business; the eye of the Federal inspector will be in every man’s counting house. The law will of necessity have inquisitorial features, it will provide penalties, it will create complicated machinery. Under it men will be hailed into courts distant from their homes.

Heavy fines imposed by distant and unfamiliar tribunals will constantly menace the tax payer. An army of Federal inspectors, spies and detectives will descend upon the state.

Who of us who have had knowledge of the doings of the Federal officials in the Internal Revenue service can be blind to what will follow?

The American income tax is perhaps the most dramatic example of how government grows at the expense of liberty. Slowly. Constantly. Inexorably.