JADE HELM’S USE OF DEATH SQUADS 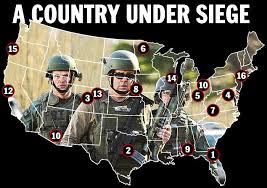 Jade Helm is morphing into something very dark and very sinsister. At the conclusion of the article, many of us will be asking about how we should collectively respond. We certainly need to explore the possibilities.

One of the reasons that I believe that Jade Helm could go live is because the bravado and attention being given to this topic. The globalists who have hijacked our government have taken off the gloves and there is no denying what they are up to. As a result, people who have been clueless about the New World Order are awakening to the level of tyranny that is growing within our country. As Jade Helm swings into full operation this coming summer, millions of Americans, that mistakenly thought were living in a Republic, will have their eyes opened as to what has happened to their precious country. Soon, the websites, Youtube channels, the television shows  and the radio shows of the Independent Media will soon their audiences grow to unparalleled popularity. And of course, the federal government minions will be there waiting as the FCC attempts to stifle dissent with the recently imposed Net Neutrality. Clearly the line in the sand is being drawn in preparation for the coming conflict.

Paul Joseph Watson and Joe Biggs wrote an interesting article on Infowars in which they have discovered that “Patriot groups across the country are preparing to launch a ‘Counter Jade Helm’ operation to keeping tabs on a controversial U.S. military exercise that some fear is part of preparations to train troops for civil unrest and martial law”. Among those protesting the Jade Helm 15 drills are former Special Operations forces as well as many veterans groups.

Along these lines, I am beginning to receive invitations to speak about Jade Helm to various groups including the Oath Keepers. People, in great numbers are and will be soon waking up and for good reason.

In recent days, I have learned that the reason that we are seeing Jade Helm activity in so many areas and we are also witnessing the prepositioning of massive military equipment, is because Jade Helm forces will isolate certain geographic areas, thus trapping a segment of the population and keep them from fleeing to other areas. The second part of Phase III of the Jade Helm operation will be the insertion of Special Forces death squads among the civilian population which will target key dissident leaders. The remainder of this article will discuss these two issues.

In my estimation, these veterans groups better accelerate their protest efforts if they want to have any meaningful impact, because in every part of this country, Jade Helm activities are growing and intensifying at an alarming rate.

Traveling north on I-15. Saw a sided train of tanks, armored personnel vehicles at North Salt Lake on the east side of the freeway with three engines. All were camouflaged light tan.

Keep up the good work.

I live in Charlotte, North Carolina. Last week the “military?” surrounded the Water Treatment Facility in Charlotte, North Carolina. Just last year the city built a new holding reservoir. It’s pretty good size and is filled to the brim with water…but I’m 59 years old and don’t remember any time in my growing up years seeing this much “military” shuffling going on in the USA.

I’ve been an independent researcher for over 30 years…. I’m now 68 and moved out of Houston, TX…, following a friend’s advice to come to Patagonia, AZ…
Considering Jade Helm, I thought you’d want to know that the rumbling noise I heard early this evening was not 18-wheelers on Rt 82, but several bombers flying overhead from direction of Nogales heading east, maybe to Ft. Huachuca, followed by several military helicopters. I have always been very prescient and have a very bad feeling about what’s being put into position to bring genuine shock and awe to America…