This Is Going to Be Bigger Than the NFL by 2020

We’ve been talking about marijuana stocks for awhile now…

A massive industry is budding, and legislation is, slowly but surely, supporting medicinal and recreational aspects of “going green.”

Like all emerging trends though, not everyone is convinced quite yet. A reader recently wrote to us, stating:

Quoting my 21-year-old grandson, who is headed for a MS program in electrical engineering in May: “You are crazy if you don’t think marijuana is a gateway drug. For four years, I have watched fellow students get hooked on hard drugs, and they started on marijuana.” He made this statement to his father, a libertarian, who said last Thanksgiving that marijuana should be totally legalized. Your article pushing marijuana is so offensive that I am canceling my Outsider subscription.

Obviously, our intent is not to offend. Our intent is to bring you lucrative investment opportunities as they unfold in the wake of generational turnings.

Moreover, while I’m sure this esteemed 21-year-old grandson headed for an MS degree in engineering (kudos to him… a noble pursuit, indeed!) is undoubtedly an intelligent young man, perhaps he isn’t adequately educated in marijuana… or psychology, sociology, neuroscience, drug abuse, and pharmacological effects of cannabis at large.

One such expert in drug use and public health, Jacob Sullum, explains the unsubstantiated gaps of this “gateway” theory, asserting:

…[the theory’s] durability is largely due to its ambiguity: Because it’s rarely clear what people mean when they say that pot smoking leads to the use of “harder” drugs, the claim is difficult to disprove.

Notice that none of these interpretations involves a specific pharmacological effect of the sort drug warriors seem to have in mind when they suggest that pot smoking primes the brain for cocaine or heroin. As a National Academy of Sciences panel observed in a 1999 report, ‘There is no evidence that marijuana serves as a stepping stone on the basis of its particular drug effect.’ Last year the Canadian Senate’s Special Committee on Illegal Drugs likewise concluded that ‘cannabis itself is not a cause of other drug use. In this sense, we reject the gateway theory.

Even the National Institute on Drug Abuse isn’t convinced that cannabis is a gateway drug at all. In fact, it’s clearly indicated that most marijuana users do not go on to use “harder” substances. When compared with that of alcohol or tobacco, there is nothing particularly different about any pharmacological effect of cannabis that would make it more likely to cause a person to use more harmful substances.

Criticism for this gateway theory has spread far and wide. The Economist published a thought provoking editorial just a few days ago entitled “Is marijuana a gateway drug?”

The Economist emphasizes the argument that, “to the extent that marijuana acts as a social gateway to other drugs, legalisation slams that gateway shut.” Additionally, The Economist reports:

In Colorado and Washington—and, soon, Alaska and Oregon—marijuana is sold not by drug pushers but by heavily regulated dispensaries, which sell only one drug. The chances of being offered hard drugs under the counter in a Denver pot shop are roughly the same as being offered cocaine along with your beer by a cashier in Walmart.

It will be years before the full effects of legalisation are known—after all, an academic debate continues about the impact of the prohibition on alcohol in the 1920s and 30s. But the bigger picture suggests that there is little reason to panic. In the past few years, the number of monthly marijuana users in America has steadily risen, from 14.4m in 2007 to 18.9m in 2012. If marijuana were a gateway to harder drugs, one might expect those drugs to become more popular too. Yet during the same period, consumption of most other substances actually fell. The number of monthly cocaine users dipped from 2.1m to 1.7m and the number of people using methamphetamine (“crystal meth”) fell from 530,000 to 440,000. Heroin use has been going up, but the gateway drug there seems to be prescription painkillers.

So while everyone is certainly entitled to his/her own opinions on any and all controversial subjects, facts are facts and should be treated as such.

And, truth be told, I think the benefits regarding the legalization of marijuana far outweigh the concerns a few people have when holding onto this flawed notion of the “gateway” theory.

From an economic perspective, the passage of Amendment 64 in Colorado, occurring back in November 2012 — marking the state as the first to regulate the cultivation, manufacture, and sale of marijuana for adults 21 and over — has been a godsend.

According to the FBI’s Uniform Crime Reporting data there’s been a 10.1% decrease of overall crime and a 5.3% drop in violent crime. In just the first four months of legal marijuana sales, the State Department of Revenue recorded $10.8 million in taxes.

And DrugPolicy.org indicated that there’s been a reduction in incarcerations yielding a reduction of collateral consequences and, thus, increased savings overall. According to the Colorado Center on Law and Policy, the state could save an estimated $12-40 million over the span of a year by reducing criminal penalties.

Over the last decade, the state averaged more than 10,000 arrests and citations every year for minor marijuana possession at the levels now legal in the state.

Further support comes directly from the horse’s mouth: Gov. Hickenlooper compared Colorado’s economy since legalization to that of other states noticing that, “While the rest of the country’s economy is slowly picking back up, we’re thriving here in Colorado.” Commercial real estate has increased quite dramatically, with houses in the state appreciating 8.7% since the inception of the new marijuana laws.

Of course, other states would be pragmatic and wise to jump on this bandwagon. The state of Alaska stands to gain $23 million in annual tax revenue from the marijuana market. Oregon could see nearly $40 million in marijuana taxes the first year alone.

New Mexico will have marijuana legalization on the ballot in 2016, joining California, Arizona, Nevada, Maine, and Massachusetts.

The fact of the matter is that the entire industry is moving away from a black market that has been wearing on local economies in communities all over the nation.

From a medical perspective, this paradigm shift towards mass support of marijuana use is also a godsend.

My little sister has struggled with epilepsy since she was 12-years-old. While in and out of research hospitals over the years, several of her neurologists touched on the concept of cannabis oil as treatment… lightly, of course, because it wasn’t legal yet.

Obviously, this was quite unconventional and my parents and sister were skeptical. As of February 26th, Virginia’s governor Terry McAuliffe signed a bill permitting medical use of marijuana oil for people suffering from epilepsy.

This method has been tried and tested (possibly even prior to February 26th), more successfully than almost any other experimental treatment my sister’s endured over the past 13 years. She’s been able to reduce her pharmaceutical drugs from about 15 at one point to just two now — one preventative with another tablet that is put under the tongue at onset of seizure, should one occur.

Her seizures are now under control enough to allow her to live a mostly normal life. She could legally drive a car for the first time at age 25 and is a student at the University of Virginia now at age 26 (better late than never!).

But it’s not just for adults. Researchers have noted that it seemed to have especially profound results in children suffering epilepsy as well — the strain known as Charlotte’s Web.

And better yet, major headway has been conducted over the past couple of decades regarding how potently advantageous various strains of medical marijuana are in treating/managing the pain and unpleasant side effects of other serious and debilitating conditions including but not limited to:

I can’t adequately express to you how massive each of those individual markets is. And the best part is, marijuana is much safer than almost all pharmaceutical drugs.

So it’s not surprising that legal marijuana is the fastest-growing industry in the United States. The Washington Post cited that it could be bigger than the NFL by 2020, with revenues of ~$35 billion if marijuana is legalized at the federal level. The Post reports:

Considering the legal marijuana industry generated roughly $1.53 billion in revenues in 2013, according to industry research group Arcview Market Research, it’s reasonable to assume there’s a lot of growth potential between now and then. That potential has attracted investor interest, but enthusiasm remains constrained due to the uncertainties surrounding legal weed.

Regardless of the eventual legalization path, we’re still looking at a good-sized industry that will generate a significant number of jobs and tax revenue. The concern is that we’ll see an increase in societal harms associated with increased marijuana use. But as I’ve written repeatedly, these harms have stubbornly failed to materialize even as states have liberalized that marijuana laws over the past ten years.

The industry grew 74 percent in 2014 to $2.7 billion. Eighty-two percent of retails sales were for medical use, and California made up 49 percent of all U.S. cannabis sales by state in 2014. 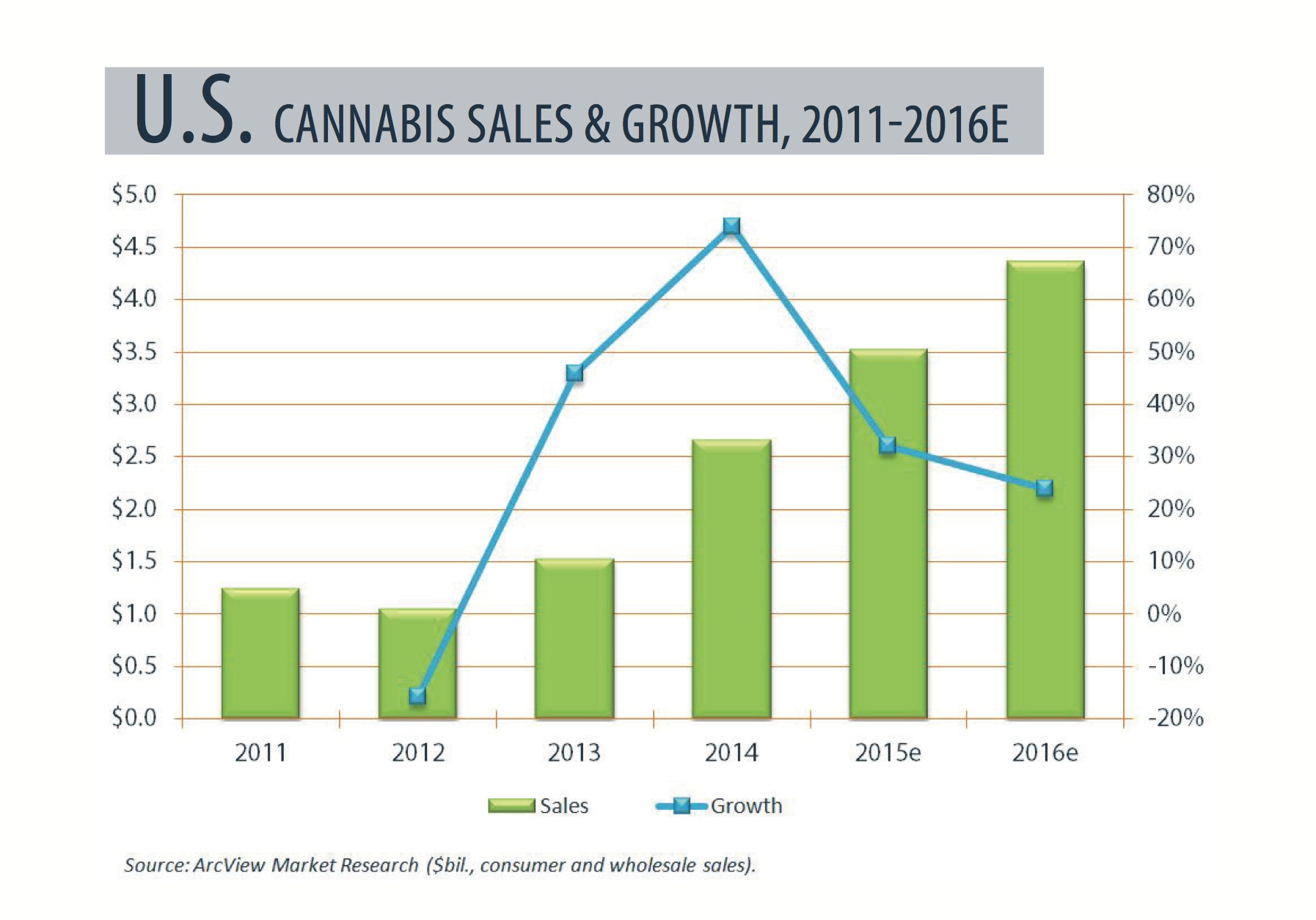 So instead of perpetuating mental disorders like PTSD, depression, and anxiety by sending petty marijuana “criminals” to jail, perhaps the country at large should seriously consider the vast array of positive effects that marijuana has presented us with over the years (including its ability to counter the devastating effects of the above mentioned mental disabilities).

It’s no wonder marijuana stocks are getting billionaire backing at a higher rate than almost anything else, including technology and biotech. If I were you, I wouldn’t wait for legalization to reach the federal level. I’d start scooping up some shares now while they’re still affordable. 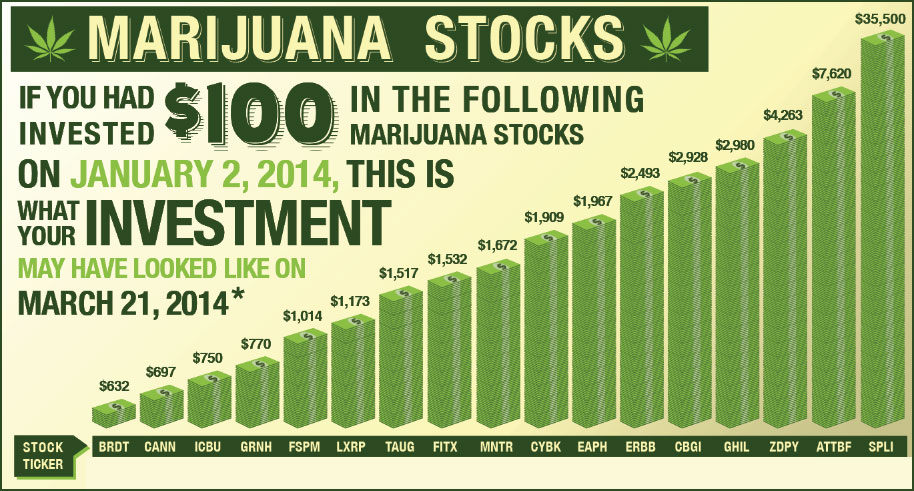 To learn about at some of the companies making the biggest splashes in this rapidly budding industry, take a look at Jimmy Mengel’s latest research by subsribing to The Crow’s Nest.