Death Domes Are the End Game for Jade Helm 15 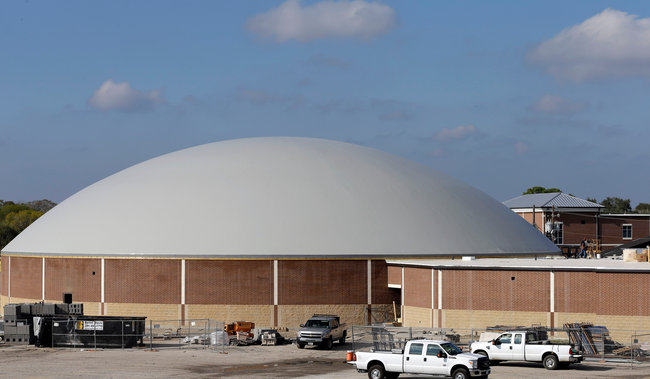 The new dome in Edna, Tex., will also serve as a high school gymnasium. The $2.5 million structure, mostly financed by FEMA, is designed to withstand winds of up to 200 miles per hour. Credit David J. Phillip/Associated Press

I have been incapacitated for the past 36 hours and am still not able to speak clearly. However, that does not mean that the flow of information regarding Jade Helm 15 has slowed down.

With regard to Jade Helm 15. there are enigmas upon mysteries based upon  false flag events. And the biggest false flag event is tied to the notion that Russians have penetrated territorial boundary of the lower 48. Yes, it is true that the Russians have a presence inside of the United States courtesy of the Obama administration. However, the notion that the Russians are preparing to arm Texas-based insurgents who favor withdrawing from the United States, is not true. The following is represents accurate reporting in so far of what has been released. However, the following represents a PSYOPS operation. In other words, it is a false flag.

According to this scenario, The United States is arming the military forces of Georgia and the insurgents in Kiev. Russia views these actions by the U.S. as an act of war. In retaliation, Russian troops have been infiltrating the United States via Canada and they plan to support a civil war in the American Southwest which will commence Texas. This premise further states that Jade Helm 15 (JH 15) is designed to stop the Russian attempts to ferment a civil was inside of the United States.

This information is flawed on its face. Geographically, it makes no sense for the Russians to initiate an action by coming in through Canada, which would be thousands of miles from their intended action. It makes infinitely more sense to initiate such an insurgency close to the target, in Mexico, where there is no security to speak of. Further, if JH15 is designed to thwart this Russian action, then why isn’t the drill being initiated at the point of territorial penetration, namely near the Canadian border. Also, Canada and the United States have very strong mutual defense treaties. If Russians were coming through our northern border without the permission of the Obama administration, the Canadians are obligated to act.

What we are witnessing here is an attempt on the part of the Obama administration is to plant stories which support the Russian intent to wreak havoc inside our country. And they are doing by hiding their disguised purpose in plain sight.

No American in their right mind would support a Russian inspired overthrow of the U.S. government, whether it is would be in one state or in all 50 and this is exactly what the Obama administration is counting on.

As this information has been leaked to the alternative media, the reaction was predictable. Most Americans would come to support JH 15 if they were to come to believe that the “drill” was designed to stop such an action.

A very revealing clue as to the intent of JH 15 comes to growing presence of Death Domes.  There are 28 known Death Domes in Texas.

The New York Times describes Death Domes as “dual use domes”. In the case of Edna, Texas, the local high graciously accepted one such dome to double as its gymnasium as well as being a shelter for against raging hurricanes. Death Domes can house thousands of unsuspecting Americans.

The Death Domes are nearly escape proof as the steel rods supporting the facility go 30 feet underground. The walls are double layered made of cinder block reinforced by steel bars. The most telling aspect of this death dome is that they are FEMA funded! Funny, I did not think that there was supposed to be any FEMA camps.

The True Purpose of Jade Helm

The release of the information that Russians are coming through Canada to start a civil in Texas is a PSYOPS, and not a very clever one at that.

As this false flag rumor begins to spread, the masses of sheep in this country will come to support any action designed to thwart such an action by the Russians.

On Friday March 27, 2015, I was interviewed by Nik Rajkovic  a News Reporter for NewsRadio 740 KTRH in Houston. In the course of the interview, Rajkovic informed me that he had interviewed a Sheriffs Deputy and was told that Jade Helm 15 was practicing “extractions of dissidents”.  The extractions will transport the dissidents to the Death Domes for final disposition.

Following JH-15 will be a formal declaration of martial law.