China Wins Another Round – Dollar One Step Closer to Irrelevance

Something very interesting is taking place…

Our closest economic allies are breaking ranks and siding with China.

Only Japan is holding out.

Yes, in an ironic twist, it’s the United States that is being isolated economically.

Of course, we only have ourselves to blame.

For the past 70 years, the United States has used the World Bank and IMF to extort policy changes from vulnerable countries.

And we’ve been able to get away with that because there is no alternative.

Not until now, anyway.

The emergence of the AIIB means that instead of crawling to the United States for giant loans, developing Asian countries can go to a mega-bank dominated by China.

Make no mistake, this is a major blow for U.S. hegemony.

It’s the dawn of a new era, my friends, one that’s leaving the post-WWII Bretton Woods system behind…

When I say the United States has been loan sharking for 70 years, I mean it.

The first loan the World Bank ever made was to France in 1944. But for France to get the money, the country had to purge its government of any members associated with the Communist Party — a stipulation with which France complied.

This policy continued on with the Marshall Plan in 1948, when we gave $13 billion (about $160 billion today) to finance Europe’s reconstruction. That left Washington as Europe’s main financial and geopolitical beneficiary — a position that, to this day, gives us a tremendous amount of leverage. Not the least of which is dollar primacy.

The rapidly-developing Asia-Pacific region demands roughly $750 billion of infrastructure investment each year. And it’ll require some $8 trillion over the next decade.

To start, the AIIB could lend up to $175 billion for infrastructure projects in the region.

But here’s the thing, that money will come with strings attached.

For example, in exchange for an infrastructure loan (to build a highway, bridge, port, etc.) China could require the borrower to contract with Chinese companies. That way, the money it lent would come back with interest, as well as reduce overcapacity problems in China’s heavy industries.

It’s a win-win-win for China.

The bank could also be used for political leverage. Again, the U.S. has been doing this for decades. 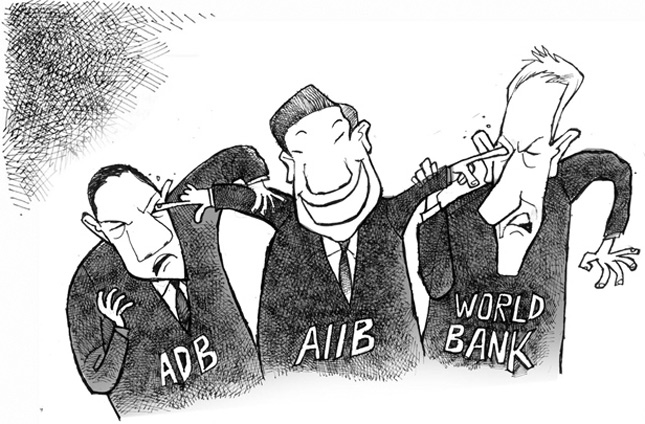 Loans from the World Bank and IMF are often tied to political “reforms” such as tax increases, privatization, liberalizing trade, raising interest rates, or eliminating subsidies on food, fuel, and medicine.

China could do the same thing.

Right now, China is aggressively trying to expand its maritime borders at the expense of neighbors like Vietnam, the Philippines, and Japan. Well, a country like South Korea, Cambodia, or Indonesia might be more inclined to back China’s position, in exchange for some generous financing from the AIIB.

That’s the kind of soft diplomacy China is getting here.

And that’s hardly the only benefit.

Another major benefit of the AIIB is that it will help diversify China’s investment portfolio.

Remember, China has the world’s biggest supply of foreign exchange reserves — some $2 trillion worth. But a huge portion of those are parked in U.S. Treasury bonds.

Well, as we all know, U.S. debt isn’t yielding a very big return right now. And there’s a legitimate concern over whether or not the U.S. government even intends on paying back what it owes.

That’s a big reason why China has been buying up real estate and foreign companies through its sovereign wealth fund and state-run enterprises. It’s trying to diversify.

Investment through the AIIB will broaden China’s exposure to countries other than the United States, delivering a higher return, reducing dollar risk, and ginning up demand for its resource, construction, and manufacturing industries.

Furthermore, when China conducts this business, it will be with its own currency, the renminbi, not the dollar.

Indeed, over the past few years, China has issued billions of dollars’ worth of currency swaps with nations around the world. From major players like the ECB, Great Britain, Australia, Russia, and Brazil, to little guys like Suriname and Armenia.

Beijing is systematically eliminating the dollar from its cross-border trade. And when the AIIB starts making loans,  they’re going to be in renimbis not dollars.

(Incidentally, this will have a huge impact on the price of gold and silver.)

Like I said, it’s the dawn of a new era.

Don’t get me wrong. I’m not saying China’s out to the destroy the U.S. There’s nothing vindictive or malicious about these actions. To the contrary, imitation is the sincerest form of flattery and China is ripping pages right out of the U.S. playbook.

Competition is, after all, the very essence of the free market.