Another one bites the dust.  South Korea is seeking to be a founding member of Beijing’s latest globalization push, the Asian Infrastructure Investment Bank (AIIB).

South Korea marks yet another Washington ally that has expressed a desire to join the bank despite U.S. misgivings about it.  China has basically been left out of having any say within the large Bretton Woods institutions — International Monetary Fund and the World Bank. In creating the AIIB, China is basically saying that they are willing to go it alone in helping to fund southeast Asia’s massive infrastructure needs.

South Korea’s finance ministry said in a statement on Friday the AIIB would help fund large scale infrastructure projects and compliment existing projects like highway construction in India and water treatment in Vietnam being funded by the World Bank.

“he AIIB is the first international financial institution Korea joins as a major member country from its inception. Korea’s growing economic role in the world requires Korea to take on more responsibilities, and the AIIB will be an important venue for Korea to that end,” the government said in the statement. The Finance Ministry said that the government elected to join the AIIB after certain changes to corporate governance were made. It did not specify those changes. 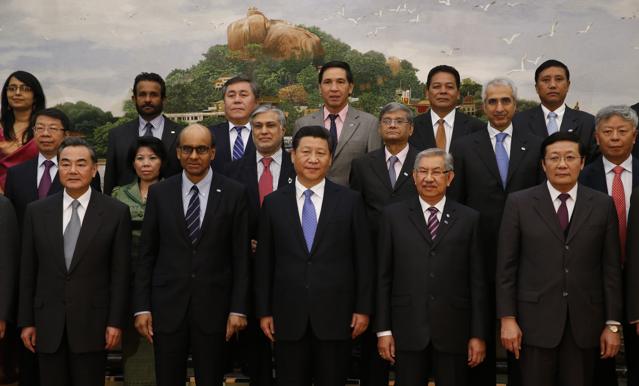 The future. Chinese President Xi Jinping (C) poses at a meeting of representatives at the signing ceremony for the Asian Infrastructure Investment Bank at the Great Hall of the People on October 24, 2014 in Beijing, China. Twenty-one countries including China, India, Pakistan and Singapore signed the agreement. But South Korea, Indonesia and Australia declined to sign on in back then  thanks to the lobbying efforts of the U.S. government. (Photo by Takaki Yajima-Pool/Getty Images)

The U.S. said it welcomed the AIIB, but essentially doubted China’s dedication to labor and human rights in large scale projects, let alone environmental standards that are factored into World Bank loans. Japan remains in the U.S.’s corner on this one and has refrained from joining.

On Thursday, NATO member Turkey applied to join the AIIB too. Becoming a founding member depends on other members approving their membership. If approved, both Turkey and South Korea will be part of the growing AIIB family next month.

The application deadline for prospective founding members is March 31.

Twenty-one countries agreed to fund the $100 billion bank in a memorandum of understanding last October. All members were from Asia. Shortly after, European friends of the U.S. hopped on the bandwagon. Britain opened the flood gates. Then in came France, Germany, Luxembourg, Switzerland and Italy. Australia is considering it.

Chin’s AIIB is another way for Beijing to lobby for its currency’s global significance. Part of that process includes opening their capital accounts to foreign investors and having their renminbi become part of the IMF’s IMF’s special drawing rights, which is the Fund’s currency basket.  The IMF will decide on that in December. China has already taken steps to open its capital account to foreigners, allowing investors to buy mainland fixed income for the first time last year.