by Dave Hodges, The Common Sense Show In recent months, both North Korea and Iran have threatened to launch separate EMP attacks upon the United States. Is such an attack likely? Would a foreign entity dare to launch such an attack given the threats made by Iran and North Korea? However, the emerging information does not suggest that North Korea or Iran will be the perpetrator. They may get the blame for an upcoming false flag attack. However, the real perpetrator are likely to be the forces connected to JH 15 and the drills are providing cover for such an event.  If an attack was launched upon the power grid, what would be the effects? These questions are the subject of this article.

An EMP Attack Is An Utterly Devastating Event

Short of a 3 mile-wide asteroid landing in the ocean, I cannot think of a more devastating event than an EMP attack. If anything, the scenarios I present in this article are on the very conservative side.

I strongly concur with my Congressman, Trent Franks, that an EMP attack is the most devastating event that our country could ever face. Congressman Franks represents a small group of Congressmen who have desperately been trying to attract attention to the possibility that a nation-wide EMP attack would prove more devastating than if a dozen of our cities were to be hit by a nuclear attack.

Our Power Grid Is Very Vulnerable 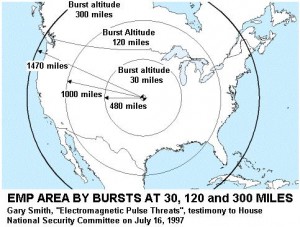 When one considers the total devastation of an EMP attack, the Chinese would be fools to destroy their own assets. The NSA Director is lying and we are being set up for a false flag attack.

Our power grid is susceptible to hurricanes, flooding, lightening strikes and Corona Mass Ejections (CME). The grid is also vulnerable to Electromagnetic Pulse (EMP). Dr. John Casti, author of the book, X Events The Collapse of Everything states that EMP is only something that we have known about since the 1950’s when the United States detonated nuclear weapons in above-ground testing in the South Pacific. When one sets off a nuclear weapon, a pulse is emitted which “short circuits” all electronics and permanently damages them.

In 2010, an executive summary from the Federal Energy and Regulatory Commission, warned that an EMP would destroy the power grid, or at minimum, would seriously damage it. The most malicious threat would be a High Altitude Electromagnetic Pulse (HEMP).  A HEMP attack would have a devastating impact on all the normal channels of government coordination and communication, including intelligence and data gathering assets, and nuclear forensics. Indeed, with a  severe societal breakdown, the basic continuity of government agencies would be at risk. Under such circumstances, it is judged unlikely that the source of a  HEMP attack, given even a minimal attempt to disguise it, would ever be known.

The Most Devastating Delivery Method of a HEMP

Most experts agree that the most effective delivery method for a nation-wide EMP, or HEMP attack would be the Club-K Container Missile System.  In its advertised versions, it is designed for launching four or six cruise missiles; It could obviously be converted for a long-range ballistic missile. A Scud-D ballistic missile would fit quite easily into this container as well. These delivery devices would be readily available on the open market and a cargo ship could be rigged to launch such missiles. The North Koreans certainly have the capability to carry out such an attack. The Iranians might, depending on how much technological assistance they have received from Russia. Again, these countries are not going to carry out this attack, the coming attack scenario is setting up to blame these countries as a pretext for war. However, the real impetus for what is coming will be from inside the United States.

This congressman has tried to warn the nation about the coming threat and he has publicly stated that 90% of all Americans would be dead within two years following an EMP attack. .

A Cross-Section of Effects of A HEMP

Nearly all of the commercial sector is not protected. Most data backups of commercial systems are protected from just about every other threat, but not protected against EMP; and most data backups are located within the area likely to be affected by the EMP attack. Computer systems and the information they contain are especially vulnerable.  In the old Dark Angel television series used to say, in the first episode of the old Dark Angel television series, ” . . . the electromagnetic pulse turned all the one and zeros into plain old zeros . . .”

An EMP attack would literally send thousands of small and mid-sized businesses in the United States into bankruptcy in less than a millisecond. Other than your printed statements, the banks would have no records of your ledger sheet. You would lose all of your money in the bank.

Education records would be destroyed and only hard copies of transcripts would serve as the remnants of an extinct system. If there is a silver-lining, at least Common Core would stop wreaking its havoc on American students before the damage was too widespread.

America would see catastrophic conditions immediately take place in our hospitals and convalescent centers. Within a few days, old age homes would lack the resources and services of the staff to help preserve the lives of those who are virtually helpless. Patients on the operating table would stand a good chance of not surviving. Hospital backup generating systems would be rendered unusable. Food and water would become a scarce resource. Many hospital personnel would walk off the job by the beginning of the second or third day. The only medical personnel that would stay would be those that live too far away from home to walk. People would not be able to get their life-sustaining medications and services, most of which are electrically powered. Our worst fears would be realized.

In one of the most dramatic effects, airplanes would fall from the skies. Untold thousands of people would immediately be plunged to their deaths. And their deaths might be considered merciful compared to the fate that the majority of the rest of us would face over the next two years. Most automobiles will not work unless they have all pre-electrical parts. Even then how long would gasoline be available? Many people on the various subways, would be hopelessly trapped depending on the time that an electromagnetic pulse would be released. And we can all be sure, that the release of an EMP, through false flag planning, would occur at the optimal time to ensure the maximum loss of life.

One of the most tragic developments arising from an EMP attack with the fate of schoolchildren geographically isolated from their parents who have already commuted to work. Reuniting parents and their children would be next to impossible for the majority of Americans who have a 30 minute commute or more to work (20 miles).

If you were a teacher, how long would you stay on the job and ignore the welfare of your family?Getting home and reuniting with family will be problematic.

Your cell phones, your land lines, text, twitter, emails and faxes will not work. Nearly all broadcast stations, especially television stations, would go off the air.  Due to the high level of computerized automation, the equipment in most radio and television studios would be so completely destroyed that most commercial stations would be damaged beyond repair.

According to a statement of Damon Penn, a DHS official, made to a committee of the U.S. House of Representatives on July 8, 2011, a limited number of critical radio stations are being retrofitted with some EMP protection.  However, most of us will be without the benefit of mass communication.  Smoke signals anyone?