by Phil Butler, Russia-Insider When president elect Barack Obama said he and vice president Joe Biden would “renew America’s security and standing in the world through a new era of American leadership,” most Americans believed him. While die hard Obama supporters still squabble over just what the beleagured leader has accomplished, there’s no argument standing today to support America’s foreign policy. News today the administration took it on the chin from China, is going to be a Republican rallying call noone will miss in 2016. The proposed Asian Infrastructure Investment Bank is a gut punch to the dollar. Update: The White House has launched a questionair to get help from Americans on where the budget should be spent (screenshot below)? Also, the president has released his picks to win the NCAA Tournament as well. Americans should rest easy knowing their Commander in Chief has the odds on favorites in round ball. Already economic analysts are calling Beijing’s alternative banking win a “diplomatic disaster” as the heart of Europe’s money machine signs up for a new paradigm. When Britain became the first US ally to join the Shanghai based investment bank, Bloomberg didn’t even make a big deal. Now that Germany, France, and Italy have signed on, even after Washington begged, the cat-astrophe is out of the proverbial bag. Luxembourg did not take long to follow suit, as financial centers around the world appear set to go the way of the China-Russia shift. Obama has to be reeling at this news.

As if Obama PR were not already in big trouble over war drums across eastern Europe, North Africa, the Middle East and over ISIS, those hard fought economic PR wins domestically will fall victim to a sentient fact. China is filthy rich with ready cash, and owning half the aforementioned bank ensures that if the World Bank falters a smidgeon, China will ride to the crest of world economic prowess. For American interests, the news is worse than the Great Recession, and literal survival could be the final gong. Add to this the administration’s blatant attacks on Russia and her economy, the divergence of NATO, the IMF, the World Bank, and the US away from sensible dialogue with Russia or China…. 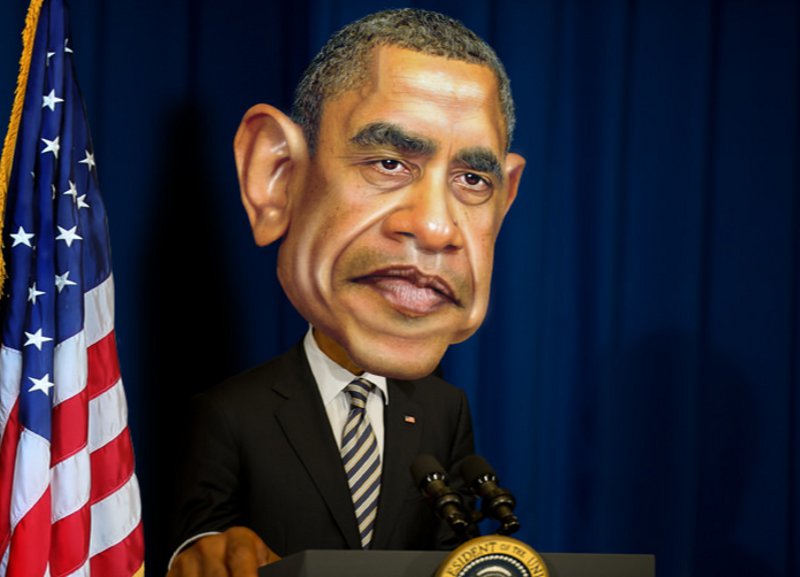 Barack Obama – Caricature via Donkeyhotey Well, Obama’s policies could end up destroying any hope of a future American Dream. Worse yet, experts tried to signal this would come. Even besieged Russian President Vladimir Putin warned sanctions and US foreign policy failures would lead to this. It’s as if Obama and his constituents believed China and Russia would just sit still and be steam rolled. European austerity, bitter losses to sanctions and utter failure by a host of fiscal leaders, nothing has seemed to sway Washington’s course. If the American people had voted to destroy the country by self induced death ray, the outlook would not have been so grim for the people’s economic future. The American people are now faced with the ramifications of failed US diplomacy on nearly every front. Worst of all perhaps, US readers, watchers and listeners have been fed a continual stream of misleading financial indicators. If Obama’s domestic policies have anything to do with money, then perpetual war, angering long standing allies, and the US banking systems future losing out to foreign interests spell DISASTER. China, anxious to capitalize on massive cash reserves strategically, is building with the BRICS an alternative world investment structure. Beijing has not simply proposed the AIIB though. The New Development Bank in partnership with Brazil, Russia, India and South Africa is another branch, as is the Silk Road development fund for the country’s Asian neighbors. 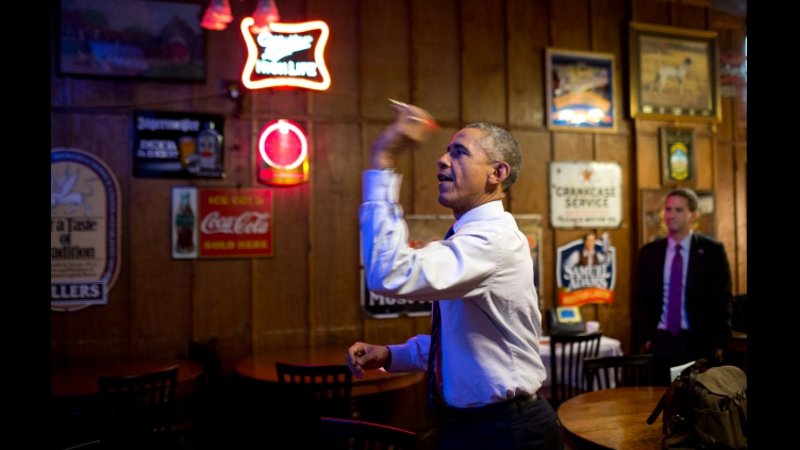 Rumor has it Obama is set to challenge Putin and Xi Jinping to darts next – Official White House Photo by Pete Souza Detractors of Obama’s foreign policy have become more condemning and bold of late. Day before yesterday Rep. Paul Gosar said the president has “no clue” what he is doing. A recent McClatchy-Marist poll found showed Americans as fed up with the administration’s handling of outside affairs, but congressional recognition and mainstream media polls do not equal mended international fences. Russia has suddenly become a foe, as has China, and our Europe allies are poised to dump the statue of liberty in favor of surviving in a world that appears to be leaving America behind. The sound of that is enough to make this writer break a sweat, after having seen my country be a beacon for freedom for decades, watching Washington trash our reputation is sickening. Summing up G. Murphy Donovan over at American Thinker galvanizes much of what is wrong in American international relations:

If somebody does not do something soon, everyone who saw America’s ship sailing high once, may get to wave Bon Voyage to the rest of the world sailing away. It once was said; “No man is an island.” Today no island can go it alone, not even the land of liberty.