Sen. Menendez Will Be Indicted Because He Refuses to Commit Treason With Obama

Things are not quite as simple as they seem to be in politics. Senator Menendez has been accused of inappropriately accepting gifts in exchange for “niceties”. A Justice Department probe, headed by Eric Holder, himself, will likely result in Federal corruption charges against Menendez which revolves around his relationship with Florida ophthalmologist Salomon Melgen. According to the US government watchdog Center for Responsive Politics, Melgen contributed $700,000 to Menendez’s 2012 US Senate race through an intermediary campaign funding channel. The senator also allegedly received gifts and multiple trips on Melgen’s private jet and some of these gifts are alleged to include the services of prostitutes.

The Menendez Transgression Doesn’t Even Move the Corruption Needle

I guess the American people can sit back and thank the Justice Department for being so diligent in upholding our laws and the “high expectations” we have for our elected officials. I could barely write these words without choking. When it comes to Congress, what Menendez is accused of doing is the metaphorical equivalent of you and me getting a parking ticket.

Give Menendez a Parking Ticket and Send Him On His Way

Please allow me to briefly digress to demonstrate what a minor offense Menendez has committed in comparison to what really goes on in the Senate. 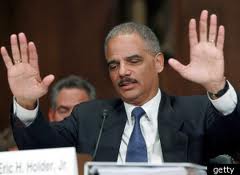 When it comes to Senator Menendez, Holder is killing flies with a sledge hammer.

If Obama and Holder wanted to protect the American people from corruption in the Senate, Senator Dianne Feinstein would already be in prison. For example, in 2009, Senator Dianne Feinstein introduced legislation which directed $25 billion in “taxpayer money to a government agency that had just awarded her husband’s real estate firm a lucrative contract to sell foreclosed properties at compensation rates” higher than the industry standards. Without being a member of the Senate Banking Committee, Feinstein curiously stepped outside of her bounds and offered to help the FDIC obtain money in its efforts to meet the increasing demand of compensation related to the rising level of home foreclosures. Feinstein’s offer was delivered only a few days before the agency determined that CB Richard Ellis Group (CBRE), the commercial real estate firm that Feinstein’s husband Richard Blum leads as the undisputed board chairman, had just won the competitive bidding contest for a highly coveted federal contract to sell foreclosed properties that the FDIC would have inherited from a growing list of failed banks.  Incredulously, the couple had the audacity to claim that they didn’t even know about CBRE’s business relationship with FDIC until after it was awarded, despite the fact the Blum was the Board Chairman. The Washington Times notes that only a few days after consummating the contract with the FDIC, “CBRE raised $207 million through a stock offering that sold for $3.77 a share. Mr. Blum’s investment partnerships bought 10.6 million shares at the market price of $3.77. The stock offering was announced a couple of days before the signing of the FDIC contract.” This is called insider trading and Diane Feinstein and her husband, Richard Blum, are guilty of the offense.

ISN’T THIS A LOT WORSE THAN WHAT SENATOR MENENDEZ IS ACCUSED OF DOING? WHERE’S ERIC HOLDER AND THE LONG ARM OF THE JUSTICE DEPARTMENT?

Feinstein was also a member of the Military Construction Veterans Affairs and Related Agencies Subcommittee (MILCON) from 2001 to 2005. During her tenure, Feinstein voted for appropriations worth billions of dollars to her husband’s firms URS Corp. and Perini Corp.

Both Perini’s and URS’ majority shareholder is, again, Feinstein’s husband, Richard Blum. It is estimated that Perini now holds at least $2.5 billion worth of contracts tied to the imperialist expansion of the United States military’s policy of endless war. Blum’s largest Department of Defense contracts are “indefinite delivery-indefinite quantity” or “bundled” contracts. Incredibly, you and I are on the hook for guaranteeing profit margins for Feinstein’s husband’s company. In May 2006, Perini held a series of bundled contracts awarded by the Army Corps of Engineers for work in the Middle East worth $1.73 billion. Perini has also been awarded an open-ended contract by the Air Force for military construction and environment quality control at closed military bases.

Feinstein’s personal wealth accumulation since becoming a senator has grown to nearly $200 million. Feinstein has never held a job outside of public service. I am having trouble understanding how can a public servant accumulate a fortune of this magnitude.