by Dane Wigington, ZenGardner HAARP is the acronym many people recognize, it is an “ionosphere heater” facility in Alaska. Mainstream media and the military industrial complex tried to convince the public that HAARP was going to be completely dismantled by the summer of 2014, but did this happen? No, and now it seems HAARP has been funded through 2015, the lies never end when the government is involved. What many people don’t know is that the Alaskan HAARP facility is only one of many major ground based ionosphere heaters around the world. This global network of incredibly powerful ionosphere heaters is wreaking havoc on the climate system and the biosphere as a whole. The more educated activists are in regard to what the ionosphere heaters are and what these installations can do, the more effective they will be in the battle to raise awareness on the critical climate engineering issue. The summary explanation of HAARP below is an important read.

The Military’s Pandora’s Box Source: haarp.net, article by Dr. Nick Begich and Jeane Manning This article was prepared to provide a summary of the contents of a book written in 1995 which describes an entirely new class of weapons. The weapons and their effects are described in the following pages. The United States Navy and Air Force have joined with the University of Alaska, Fairbanks, to build a prototype for a ground based “Star Wars” weapon system located in the remote bush country of Alaska. The individuals who are demanding answers about HAARP are scattered around the planet. As well as bush dwellers in Alaska, they include: a physician in Finland; a scientist in Holland; an anti-nuclear protester in Australia; independent physicists in the United States; a grandmother in Canada, and countless others. Unlike the protests of the 1960s the objections to HAARP have been registered using the tools of the 1990s. From the Internet, fax machines, syndicated talk radio and a number of alternative print mediums the word is getting out and people are waking up to this new intrusion by an over zealous United States government. The research team put together to gather the materials which eventually found their way into the book never held a formal meeting, never formed a formal organization. Each person acted like a node on a planetary info-spirit-net with one goal held by all — to keep this controversial new science in the public eye. The result of the team’s effort was a book which describes the science and the political ramifications of this technology. That book, Angels Don’t Play this HAARP: Advances in Tesla Technology, has 230 pages. This article will only give the highlights. Despite the amount of research (350 footnoted sources), at its heart it is a story about ordinary people who took on an extraordinary challenge in bringing their research forward. 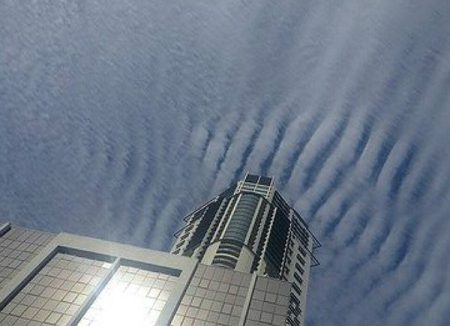 HAARP Boils the Upper Atmosphere HAARP will zap the upper atmosphere with a focused and steerable electromagnetic beam. It is an advanced model of an “ionospheric heater.” (The ionosphere is the electrically-charged sphere surrounding Earth’s upper atmosphere. It ranges between 40 to 60 miles above the surface of the Earth.) Put simply, the apparatus for HAARP is a reversal of a radio telescope; antenna send out signals instead of receiving. HAARP is the test run for a super-powerful radiowave-beaming technology that lifts areas of the ionosphere by focusing a beam and heating those areas. Electromagnetic waves then bounce back onto earth and penetrate everything — living and dead. HAARP publicity gives the impression that the High-frequency Active Auroral Research Program is mainly an academic project with the goal of changing the ionosphere to improve communications for our own good. However, other U.S. military documents put it more clearly — HAARP aims to learn how to “exploit the ionosphere for Department of Defense purposes.” Communicating with submarines is only one of those purposes. Press releases and other information from the military on HAARP continually downplay what it could do. Publicity documents insist that the HAARP project is no different than other ionospheric heaters operating safely throughout the world in places such as Arecibo, Puerto Rico, Tromso, Norway, and the former Soviet Union. However, a 1990 government document indicates that the radio-frequency (RF) power zap will drive the ionosphere to unnatural activities.

” … at the highest HF powers available in the West, the instabilities commonly studied are approaching their maximum RF energy dissipative capability, beyond which the plasma processes will ‘runaway’ until the next limiting factor is reached.”

If the military, in cooperation with the University of Alaska Fairbanks, can show that this new ground-based “Star Wars” technology is sound, they both win. The military has a relatively-inexpensive defense shield and the University can brag about the most dramatic geophysical manipulation since atmospheric explosions of nuclear bombs. After successful testing, they would have the military megaprojects of the future and huge markets for Alaska’s North Slope natural gas. Looking at the other patents which built on the work of a Texas’ physicist named Bernard Eastlund, it becomes clearer how the military intends to use the HAARP transmitter. It also makes governmental denials less believable. The military knows how it intends to use this technology, and has made it clear in their documents. The military has deliberately misled the public, through sophisticated word games, deceit and outright disinformation. The military says the HAARP system could:

The above abilities seem like a good idea to all who believe in sound national defense, and to those concerned about cost-cutting. However, the possible uses which the HAARP records do not explain, and which can only be found in Air Force, Army, Navy and other federal agency records, are alarming. Moreover, effects from the reckless use of these power levels in our natural shield — the ionosphere — could be cataclysmic according to some scientists. Two Alaskans put it bluntly. A founder of the NO HAARP movement, Clare Zickuhr, says “The military is going to give the ionosphere a big kick and see what happens.” The military failed to tell the public that they do not know what exactly will happen, but a Penn State science article brags about that uncertainty. Macho science? The HAARP project uses the largest energy levels yet played with by what Begich and Manning call “the big boys with their new toys.” HAARP is an experiment in the sky, and experiments are done to find out something not already known. Independent scientists told Begich and Manning that a HAARP-type “skybuster” with its unforeseen effects could be an act of global vandalism. Continue Reading>>>