The Plan to Implement Widespread Mind Control In America

When I wrote the following words almost three years ago, I was met with extreme derision and accusations of being a crazed lunatic with paranoid laced conspiracy theories. “Soon special interests, university think tanks, combined with key federal agencies, are conspiring to implement (not plan) complete control over the Internet”. Today, most people in the know are not laughing at this statement. In fact, after my recent interview with Doug Hagmann, in which Doug described how far the plans to eradicate free speech on the Internet have gone, many are very alarmed.  Here is the point, yesterday’s crazy conspiracy theory is today’s bona fide threat to personal freedom and well-being.

This is the first part of a multi-part series in which clear and convincing evidence will be offered which demonstrates that extreme mind control is being presently being used on targeted Americans for harassment and experimental purposes. However, as this series will demonstrate, this technology, which is not new, is in the process of being fully integrated in the police state surveillance grid and will soon target every individual on the planet.

The first part of this series will demonstrate that the technology is real, scientifically valid and certain entities have been working with this technology for over 50 years.

The Purpose of Mind Control

Initially, I believe that the two goals of mind control were (1) profit; and, (2) control of the flow of information similar to what we see in the corporate controlled media. However, I quickly realized that I had set my sights too low in assessing target goals for these nefarious groups who are in control of this rapidly expanding technology.

It is becoming increasingly clear that ultimate goal is the complete control of every individual through mind control. The power brokers of this planet are seeking to install a police state grid which is absolute in its ability to control all thought, all emotion and consequently, all behavior. The end result will be to remove all potential opposition (i.e. free will). The purveyors of this technology are the enemy of all humanity and it is clear that they view humanity as their adversary which needs to be controlled, used and then tossed aside like some piece of garbage.

If the government was to announce, tomorrow, that we had a month to comply with mandatory chipping, we would witness widespread civil disobedience. The paradigm shift would be too great for the government and its managing special interests to manage. However, if humanity can be nudged, bumped, then pushed, then shoved in that direction, the goal is much more doable. I would suggest what is happening in England is a nudge and a bump in the direction of ordinary people accepting the their own future consisting of micro chipping for the purposes of mind control.

All dogs in England will, as of April 2016, have to be micro-chipped as part of a British government attempt to cut the number of strays and make pet owners more responsible for their animals. The British government also states that it will cut down on the number of dog attacks against children. It seems that all controversial government programs are implemented under the umbrella of “protecting the children”. Whenever we hear the phrase ,”protecting the children,” we should become very suspicious.

According to British government reports, eight children have been killed in dog attacks in the UK since 2005, many of which happened in the home. Subsequently, Fido must be chipped to make the children safer. I am not sure how chipping dogs will make a dog bite less as this massive chipping program is based upon a laughable premise. Are the Brits to expect that escaping detection and prosecution will lead the dogs to be less aggressive? This is ludicrous. How then will chipping dogs make children or anyone else more safe? The short answer is that it will not. This is part of a conditioning process in which the Brits and soon, the Americans, will come to accept the chip for themselves. Inch by inch, a paradigm shift is a cinch.

I predict that a related headline, in a few short years will read something like this: All humans in the United States will, as of April 2020, have to be micro-chipped as part of a federal government attempt to cut down on the number crimes, especially crimes against children, committed by a growing homeless population.

Your Body and Life Does Not Belong to You 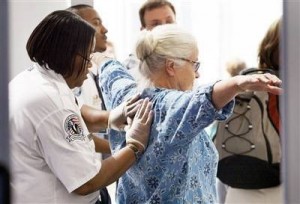 Before a population will accept chipping and other forms of potential mind control, the people must be conditioned that their body belongs to the state.

Everyday, the federal government is going to extraordinary means to condition you to the fact that you do not own and control your body. You are the property of the powers that be. Nowhere, is this more apparent than what we see at the airport as the pot bellied perverts who fill the ranks of sexual molesters at the TSA, are busy sticking their hands down our pants, groping our daughters and wives breasts and even sticking unwashed hands in our body cavities. The TSA has not stopped one terrorist event, but that is not the goal.  You are the property of the elite and the government is reminding you of this every time you travel. The implementation of the TSA as an agency which routinely commits second degree sexual assault again the flying public coincides with the implementation of various electronic surveillance advances which have the potential to “mind control” and individual. And before you respond with “The TSA protects us from terrorist attacks”, let me remind you, again, that the TSA has prevented zero terror attacks since its inception.

DNA Provides An Avenue of Attack for Targeted Individuals

In the next part of this series, it will be revealed who having someone’s DNA sample for example can be used as a means for electronic harassment and mind control manipulation. In light of this, we all need to be asking why are our infants are having DNA extracted from them at birth?

The independent media has been reporting that our government will very soon be forcing all citizens to use a biometric ID to travel, to work and hold a job.  The biometric information required for this form of ID is enough information to allow for the targeting of individuals using electromagnetic frequencies. The trend curve is clear, we are being conditioned to accept micro chipping. Micro chipping will prove to be the electronic collar needed to control and individual.

Where is the proof?

The Dawn of Micro-Chipped Mind Control

The most important bullfight in history.

In the 1960’s, Spanish neurologist, Jose Delgado was involved in a noteworthy bullfight. Without any real bullfighting training, he bravely stepped into the ring with a very dangerous and deadly bull. However, Delgado had a secret weapon.  He had previously implanted a radio-equipped electrode which was implanted into the bull’s limbic system (i.e. emotional center of the brain) which he called “stimoceivers.” Delgado subsequently demonstrated that he could manipulate an organism’s mind and body via remote control technology.  Thus, as the bull charged, an invasive electrical signal penetrated the bull’s limbic system and the bull calmly broke off the attack in mid-charge.

Delgado found that by stimulating different regions of the limbic system, which controls emotion, Delgado could also induce fear, rage and a variety of other emotions, that he was able to manipulate the type and intensity of emotional reactions. Thus, Delgado discovered the fine art of mind control.

Intrigued by his work, Delgado was invited to teach and be a guest lecturer at such prominent universities such as Harvard and Yale. However, in 1968, Delgado went to work at the Stanford Research Institute (SRI) and this is where much of his research trail grows cold. We now know that SRI was a CIA front and was connected to the MK Ultra experiments. In 1974, Delgado abruptly returned to Spain and later became an outspoken opponent of mind control and its potential for harm and misuse by totalitarian societies. Perhaps, he was not on board with the CIA and what they eventually had planned for the American people.

In cats, monkeys, bulls and even humans he repeatedly demonstrated that he could control emotion and ultimately behavior. . In one experiment, Delgado stimulated the temporal lobe of a 21-year-old epileptic woman while she was calmly playing a guitar; in response, she flew into a rage and smashed her guitar against a wall, narrowly missing a researcher’s head. Perhaps the most medically promising finding was that stimulation of a limbic region called the septum could trigger euphoria, strong enough in some cases to counteract depression and even physical pain.

Later Delgado was able to impact the hypothalamus of a cat and induce uncontrollable rage in the animal. Keep in mind that this technology is over 60 years old. One can only imagine how far this technology has come during that time.

Delgado’s famous bull fight and the angry cat are depicted in the following video.

The lesson is clear, embedded chips can turn normal people into crazed killers and it can take crazed killers and turn them into passive beings. Interestingly, the most famous graduate of the MK Ultra program was the Unabomber, Ted Kaczynski.