What is a Conspiracy Theory? What is the Truth?

What is a Conspiracy Theory? What is the Truth? By Prof Michel Chossudovsky, Global Research Obama is on a hot war footing. Western civilization is threatened by the Islamic State. The “Global War on Terrorism” is heralded as a humanitarian endeavor. We have a “Responsibility to Protect”. Humanitarian warfare is the solution. Evil folks are lurking. ‘Take ‘em out”, said George W. Bush. The Western media is beating the drums of war. Obama’s military agenda is supported by a vast propaganda apparatus. One of the main objectives of war propaganda is to “fabricate an enemy” . As the political legitimacy the Obama Administration falters, doubts regarding the existence of this “outside enemy”, namely Al Qaeda and its network of (CIA sponsored) affiliates must be dispelled. The purpose is to tacitly instil, through repeated media reports, ad nauseam, within people’s inner consciousness, the notion that Muslims constitute a threat to the security of the Western World. Humanitarian warfare is waged on several fronts: Russia, China and the Middle East are currently the main targets. Xenophobia and the Military Agenda The wave of xenophobia directed against Muslims which has swept across Western Europe is tied into geopolitics. It is part of a military agenda. It consists in demonizing the enemy.

A large share of the World’s oil lies in Muslim lands. The objective of the US led war is to steal and appropriate those oil reserves. And to achieve this objective, these countries are targeted: war, covert ops, economic destabilization, regime change. The American Inquisition A consensus building process to wage war is similar to the Spanish inquisition. It requires social subordination, the political consensus cannot be questioned. In its contemporary version, the inquisition requires and demands submission to the notion that war is a means to spreading Western values and democracy. A good versus evil dichotomy prevails. We must go after the bad guys. War is peace. The ‘big lie’ has now becomes the truth … and the truth has become a ‘conspiracy theory’. Those who are committed to the Truth are categorized as “Terrorists”. According to Paul Craig Roberts (2011), the conspiracy theory concept “has undergone Orwellian redefinition”… 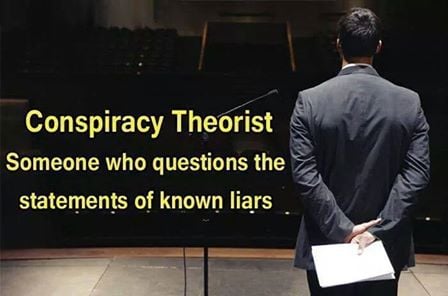 A “conspiracy theory” no longer means an event explained by a conspiracy. Instead, it now means any explanation, or even a fact, that is out of step with the government’s explanation and that of its media pimps…. In other words, as truth becomes uncomfortable for government and its Ministry of Propaganda, truth is redefined as conspiracy theory, by which is meant an absurd and laughable explanation that we should ignore

. Fiction becomes fact. Investigative journalism has been scrapped. Factual analysis of social, political and economic issues is a conspiracy theory because it challenges a consensus which is based on a lie. What is the Truth The real threat to global security emanates from the US-NATO-Israel alliance, yet realities in an inquisitorial environment are turned upside down: the warmongers are committed to peace, the victims of war are presented as the protagonists of war. The homeland is threatened. The media, intellectuals, scientists and the politicians, in chorus, obfuscate the unspoken truth, namely that the US-NATO led war destroys humanity. When the lie becomes the truth there is no turning backwards. When war is upheld as a humanitarian endeavor, Justice and the entire international legal system are turned upside down: pacifism and the antiwar movement are criminalized. Opposing the war becomes a criminal act. Meanwhile, the war criminals in high office have ordered a witch hunt against those who challenge their authority. The Big Lie must be exposed for what it is and what it does. t sanctions the indiscriminate killing of men, women and children. It destroys families and people. It destroys the commitment of people towards their fellow human beings. It prevents people from expressing their solidarity for those who suffer. It upholds war and the police state as the sole avenue. It destroys both nationalism and internationalism. Breaking the lie means breaking a criminal project of global destruction, in which the quest for profit is the overriding force. This profit driven military agenda destroys human values and transforms people into unconscious zombies. Let us reverse the tide. Challenge the war criminals in high office and the powerful corporate lobby groups which support them. Break the American inquisition. Undermine the US-NATO-Israel military crusade. Close down the weapons factories and the military bases. Bring home the troops. Members of the armed forces should disobey orders and refuse to participate in a criminal war.