from Gold Seek Last year Switzerland has globally exported gold worth 65 billion Swiss Francs. India was the biggest buyer, Germany was ranked 5th. Russia delivered 55 tons more than it withdrew. The Swiss customs administration released numbers on Tuesday this week regarding Swiss foreign trade in 2014. It contains detailed information about the country’s gold imports and gold exports. The biggest purchasers of gold According to the report Switzerland has shipped 1,747.17 tons of gold worth 65 billion Swiss Francs (CHF) abroad. Average price per ounce: EUR 965.18 (1 EUR = 1.20 CHF). The biggest buyers were India (471 tons), Hongkong (377 tons) and China (213 tons). Germany was ranked 5th with a total of 88.54 tons worth 3.3 billion CHF (2.75 bn. EUR). The biggest gold suppliers Swiss gold imports amounted to 2,205.95 tons worth 64.85 billion CHF last year. Most of the gold came from Britain. London shipped 652 tons of gold worth 23.9 billion CHF. That was the equivalent of 36,673 CHF (30,561 EUR) per kilo, or 950 Euros per ounce converted. Other major suppliers: USA (211.57 tons), Russia (58.25 tons). 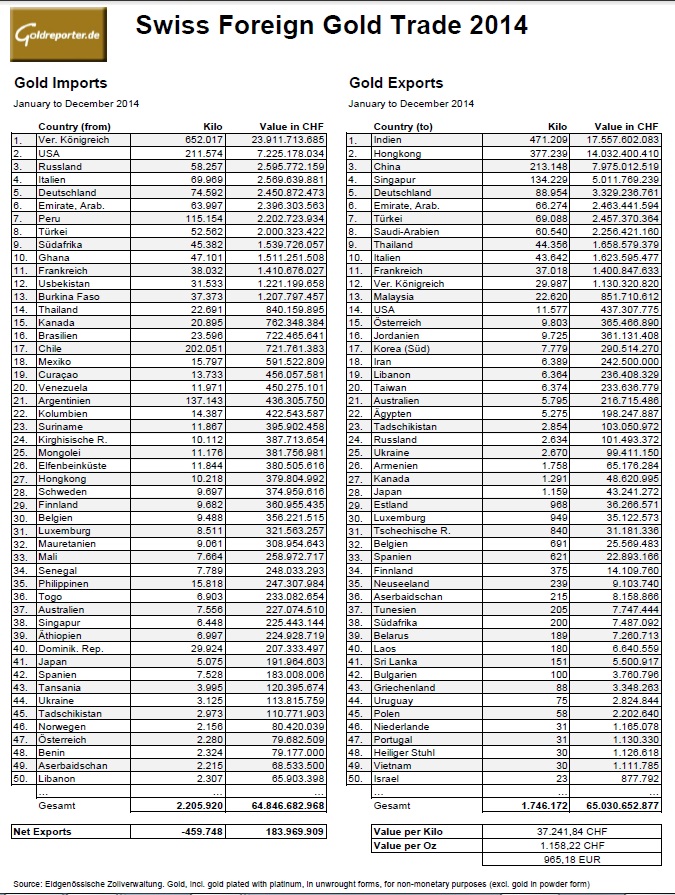 Especially the latter number is interesting since Russia only received 2.6 tons of gold from Switzerland last year. So roughly 55 tons of Russian gold remained in Switzerland. Are they stored in the high security vaults in the Swiss Massif Central? The Swiss Gold Balance The Swiss net-calculation for 2014 looks as follows: The Swiss have imported 459.75 tons more gold than they exported. However, in terms of value net exports were 183.97 billion Swiss Francs. Backdrop: Many countries deliver raw gold of low purity from mine production. Above mentioned numbers from the Swiss foreign trade statistics show the following properties: ”*Gold, incl. gold plated with platinum, in unwrought forms, for non-monetary purposes (excl. gold in powder form)”. Backdrop: 70 percent of global gold is processed by four big Swiss refineries: Valcambi, Argor Heraeus, Pamp and Metalor.