A Perfect Storm: Brace Yourself for an Epic Economic Meltdown

Over the coming months, I believe we could see an economic meltdown at least six times the size of the 2007 subprime mortgage meltdown.

Circumstances lead me to believe it could play out like the meltdown I experienced in 1998 after Long-Term Capital Management (LTCM) failed.

This time, however, there will be several crucial differences that will leave investors and regulators unprepared.

In fact, last week, I held a live intelligence briefing called The Perfect Storm: A 1998 Redux to alert Strategic Intelligence readers to the dangers.

But what I didn’t mention during the briefing were the two intelligence triggers I used to support my outlook.

I also didn’t share the investment idea that my top investment analyst and I have identified to help you profit from them. We’ve reserved that for the beta testers of one of my new elite services called Jim Rickards’ Intelligence Triggers.

I’ll explain how you can access those bi-weekly alerts in a moment, but first, let me share a little background about why I believe market intelligence confirms this threat…

To understand what market outcome is likely, we start with something we know and extrapolate from it.

In the national defense community, military commanders are known for fighting the last war. They study their prior failures in preparation for the next conflict. The problem is that each war inevitably involves new tactics for which they’re completely unprepared.

The most famous case was the backward-looking Maginot Line in the 1930s. In response to Germany’s rapid advances in WWI, France built a line of concrete and steel fortifications and obstacles on their border to buy time to mobilize if Germany tried to invade again.

Hitler made the Maginot Line irrelevant by outflanking it and invading France through neutral Belgium. The French were unprepared. A few weeks later, German forces occupied Paris.

The same mistake is made in financial circles. Financial regulators are no different than military commanders. They fight the last war. The last two global meltdowns, in 1998 and 2008, are cases in point.

In 1998, a financial panic almost destroyed global capital markets. It started in Thailand in June 1997 and then spread to Indonesia and Korea. By the summer of 1998, Russia had defaulted on its debt and its currency collapsed. The resulting liquidity crisis caused massive losses at hedge fund Long-Term Capital Management.

I know about the losses because I was there. As LTCM’s lead counsel, I was at every executive committee meeting during the height of the crisis that August and September. We were losing hundreds of millions of dollars per day. Total losses over the two-month span were almost $4 billion. But that wasn’t the most dangerous part.

Our losses were trivial compared with to the $1 trillion of derivatives trades we had on our books with the biggest Wall Street banks. If LTCM failed, those trillion dollars of trades would not have paid off and the Wall Street banks would have fallen like dominoes. Global markets would have completely collapsed.

I negotiated a bailout with the leaders of the 14 biggest banks including Goldman Sachs, JPMorgan and Citibank. Eventually, we got $4 billion of new capital from Wall Street, the Federal Reserve cut interest rates and the situation stabilized. But it was a close call, something no one ever wanted to repeat.

It was a valuable lesson for me, because soon after, regulators set out to make hedge fund lending safer. They ordered banks to monitor their hedge fund exposures more closely, improve their legal documentation and require more collateral to secure the performance on open trades.

Regulators believed this would prevent the next crisis. When the panic of 2008 hit, however, they were surprised that problems were not in hedge funds but in something new — subprime mortgages. The mortgage market collapse quickly spun out of control and once again brought global capital markets to the brink of collapse.

After the 2008 debacle, regulators again set out to fight the last war. This is the setup for the crisis I’m forecasting. They made mortgage lending much safer by requiring larger down payments, better documentation, proof of income, proof of employment and higher credit scores before a home loan could be made. But once again, regulators today are fixing the last problem and totally ignoring the next one.

The next financial collapse, already on our radar screen, will not come from hedge funds or home mortgages. It will come from junk bonds, especially energy-related and emerging-market corporate debt.

The result is a $14 trillion pile of corporate debt that cannot possibly be repaid or rolled over under current economic conditions. Not all of this debt will default, but a lot of it will. Most of the energy related debt was issued in the expectation that oil would remain in the $80 to $130 dollar per barrel range. (I explained the dynamics in January 8th’s Daily Reckoning, right here.)

Most of the emerging markets debt was issued with the expectation that the dollar would remain at its weak 2011 levels. Instead oil is down, and the dollar is up, which capsizes these expectations. The moves have been swift and dramatic. Over the past six months, oil has crashed 52%, while the U.S. Dollar Index rose 15%. 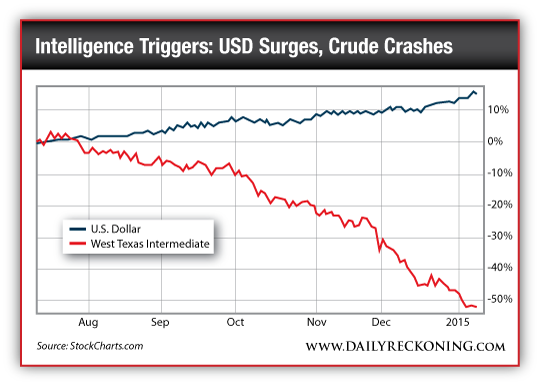 If default rates are only 10% — a conservative assumption — this corporate debt fiasco will be six times larger than the subprime losses in 2007. The world is looking at a debt catastrophe much larger than LTCM in 1998 and the mortgage market in 2008. Regulators are completely unprepared for this because they have been busy fighting the last war.

The good news for investors is that this fiasco will not happen overnight. It will take a year or two to play out. The panic of September 1998 started a year earlier, in Thailand in June 1997. The panic of September 2008 also started a year earlier, in August 2007, when CNBC commentator Jim Cramer screamed, “They know nothing!!” on live television in reference to the Federal Reserve.

This new junk debt fiasco started in the summer of 2014 but will not reach its peak until 2016 or later. Even companies and countries with dim prospects often have enough cash on hand to make payments for a while before they actually default. In the meantime, you can profit.

The bond defaults have not happened yet, but our intelligence triggers are already visible in the form of lower oil prices and the strong dollar. In intelligence analysis, we don’t wait for disasters to happen. We look at today’s information, what we call “indications and warnings,” and use inferential techniques such as inverse probability to see the future.

The strong dollar is deflationary. This means oil prices will likely remain low. This means much of the energy-sector debt cannot be paid off and will default. The defaults have not happened yet, but you can see them coming. There is still an opportunity for you to profit from the coming collapse in junk bonds, but the time to act is now.