by David Stockman, Contra Corner Have you been at the zoo when the monkeys start rattling their cages and screeching in unison? That about sums up the last 24 hours since the euro zone’s December CPI printed at negative 0.2% versus prior year. Within minutes of the release, brokerage house “economists” were out in force caterwauling that $1 trillion of ECB bond purchases were now in the bag, meaning that gamblers who had ridden the Italian 10-year bond, among other peripheral junk, all the way down from 7.5% to 1.72% would have another bountiful payday. Then, just to make sure, the rather vague reference in the Fed’s 2pm meeting notes about headwinds emanating from economic weakness in Europe was spun shortly thereafter by the Fed’s PR firm, Hilsenramp & Blackstone, as an explicit instruction to Draghi et. al. to crank up the printing presses to full throttle. But then about 8pm came the screech that ignited the robo-traders to another 300 Dow point buy-the-dip-rip. The screecher was Charles Evans, who has spent the last 24 years in the central banking cage at the Chicago Fed—–that is, after having been trained previously in the intricacies of global money and capital markets as an assistant professor of economics at the University of South Carolina. Never mind the upbeat picture of macroeconomic success painted in the meeting notes, said he. To actually allow money market rates to rise from the zero bound, where they have been pinned by the Fed’s big fat thumb for 73 months now, would be a “catastrophe” he averred. Or as one wag noted at that moment,

SPHs are up 17.30 as we write because uber dove and Chicago Fed Prez Evans said the Fed ‘should not rush to hike rates’ and hiking rates would be a ‘catastrophe.’ Algos went berserk and bought SPHs. Ergo, Evans pulled a ‘Bullard’ last night.

A “Bullard” indeed. Since Evans has a vote this year and Bullard doesn’t it is evident that the monkeys are interchangeable. But how else could you describe the babble and gibberish that emanates from the world’s central bankers and the casino economists, strategists and touts who amplify it? There is overwhelming evidence that the rampant money printing of the past decade or two has done nothing to generate sustainable growth in mainstream living standards and real wealth. Yet the monkeys keep rattling the cage, promising and demanding more ZIRP(and now N-ZIRP) and more fraudulent purchase of government debt with fiat credit congered by their printing presses. Consider some striking proof of failure. Presumably, the welfare state mecca comprising the EU-19, for example, needs at least some growth in industrial production to sustain the massive state spending, redistribution and borrowing of its member nations. But behold, there has been no net increase in industrial production since 2001. 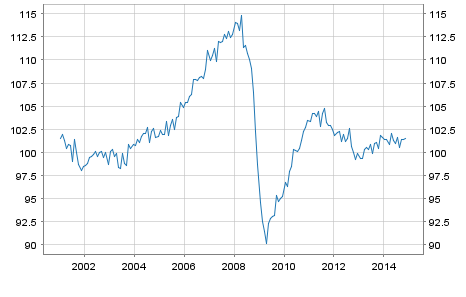 Now, fourteen years of going net nowhere can’t be due to want of applying the recipe de jour. Rather than stringency, the euro zone experienced a heaping big serving of monetary expansion and inflation during this same period. Even taken at face value, the balance sheet of the ECB is 2.6X its size in 2004——at a time when EU-19 industrial production was exactly at today’s level.

So the central bank balance sheet grew at a 10.5% CAGR over the last decade, while industrial production expanded at a 0.0% CAGR. Double digit annual money printing is not enough?

Well, actually, not even 15% annual money printing was sufficient to lift European industrial production off the flat-line. The truth of the matter is that the ECB balance sheet has not actually retracted at all from its euro 3.1 trillion peak in 2012. The trillion euro difference is just parked off balance sheet in hedge funds and the trading accounts of trend-following European banks who took Draghi’s “whatever it takes” ukase as a bankable commitment. Why not rent out your balance sheet to the ECB in order to make enormous windfall gains on the soaring bonds of the bankrupt peripherals? And then to complete this larcenous romp, fund the bonds with zero cost deposits mandated from Frankfurt, while keeping your trigger finger on the “sell” button for the day when Draghi is forced to make good? Stated differently, that’s what all the screeching was about yesterday. It was just a proclamation that the balance sheet of the ECB is actually $3.5 trillion at today’s FX rate, and that the balance sheet renters were much obliged for the negative CPI print. Likewise, it can’t be said that the euro zone’s flat-lining industrial production was caused by “low-flation”, let alone negative inflation. In fact, the EU’s harmonized CPI index printed at 88.58 in January 2000 and stood at 117.7 in December 2014. That computes out to exactly a 1.9% CAGR. You can’t get any closer to the ECB’s arbitrary 2.0% inflation target than that, yet where’s the beef? Why hasn’t the elixir of prodigious money printing and ample inflation resulted in any net growth in euro zone industrial output at all?