RECORD GLOBAL OIL DEMAND: Even As The Price Of Oil Declined

There is this notion put forth by the media that a decline in global oil demand caused the huge drop in the price of oil.  Ironically, global oil demand is higher than ever… that is, according to the IEA – International Energy Agency.

Well, that’s a good question.   I believe the fall in the price of oil is due to a DECLINE OF EXPECTED DEMAND on top of INCREASED SUPPLY.  In their May 2014 OMR Report, the IEA forecasted that global oil demand would be 93.5 mbd in Q3 and 94 mbd in Q4.  Unfortunately, demand is 400,000-500,000 barrels per day less than what was forecasted.

You see, it doesn’t take much to disrupt the balance and price.  However, as we can see, actual global oil demand is higher not lower than what took place during 2008 when overall demand fell 2 mbd.

There are many opinions as to why the price of oil has fallen more than 50% in the past four months.  Some believe it’s the Saudi’s and the U.S. working together to destroy Russia, while others believe it’s the Saudi’s trying to kill the U.S. Shale Oil Industry.  And then we have the media who attributes the huge fall in the price of oil due to weakening demand as economic activity falls.

I actually believe the fall in EXPECTED OIL DEMAND is due to the U.S. instigating sanctions on Russia.  Let me explain.  Sanctions on Russia really began to have an impact in the beginning of the second quarter of 2014.  According to the article, U.S. Sanctions On Russia Begin To Bite:

Russian markets took another knock Friday as sanctions imposed by the U.S. over the annexation of Crimea began to hit oligarchs and their businesses.

Moscow’s MICEX index fell more than 2% — taking its losses for the year to 14%. The ruble was steady, after dipping early in the day, but has still lost about 10% since the start of the year.

And President Obama warned Moscow the U.S. would target key sectors of the economy if Russia escalates the crisis in Ukraine.

Then in the third quarter, economic activity continued to soften… Russia’s Economic Growth Slows For A Third Quarter:

Russia is on track to post its weakest economic growth since 2000, the first year Vladimir Putin was president, excluding the year 2009 when the economy contracted under the burden of the global financial crisis. Massive capital flight on the back of Western sanctions and a recent decline in oil prices pose additional headwinds for the commodity-dependent economy.

Not only has Russia’s economy suffered, so have countries in the European Union that were dependent on trade with Russia.  According to the article, Eurozone Growth To Slow As Germany And France Falter:

The eurozone economy will grow more slowly than expected during the rest of this year as global conflicts continue to undermine business confidence, Europe’s largest central bank has warned.

…. It said conflicts in Ukraine and elsewhere – and European sanctions against Russia – were also affecting corporate sentiment, undermining the growth predicted for the rest of 2014.

If Russia and the European countries are experiencing a weakening of economic activity… how does that impact OIL DEMAND??  When you start to consider all the countries impacted by the Russian sanctions, then a decline of “Expected oil demand” starts to add up.

One more thing, the IEA forecasted that global oil demand would be 94 mbd in Q4 2014.  However, it fell short by 0.5 mbd of the expected 94 mbd, which is only a decline of a half percent.  Think about that for a minute.  The price of oil declined 50% in the past four months on a decline of 0.5% of expected demand.

I dear say… it doesn’t take much to curtail economic activity to slow down global oil consumption by 0.5%.

Let’s take a look at the current SUPPLY vs DEMAND situation in the global oil market:

As economic activity weakened due to the Russian sanctions, the IEA’s expected global oil demand fell short.  The RED BARS are quarterly oil demand figures released by the IEA and the OIL BARREL BARS are actual monthly supply.  From Jul-Nov, global oil demand averaged about 600,000 bd less than supply.

However, the oil supply vs demand equation was a much less than what took place in the second half of 2008:

In the chart above, global oil supply was 2 mbd higher than demand in July 2008.  Demand continued to fall in the last quarter of 2008… and so did supply.  The reason for the big decline in global oil supply in September was due to hurricane activity in the Gulf of Mexico.

We must remember, a slight decline in economic activity across many countries will also impact oil consumption… a few ten’s of a thousand barrels a day lost here and there add up.

While the Main Stream media continues regurgitate the notion that falling oil prices act as an economic stimulus, they only do so for countries that act as a PARASITE on others… such as the United States.

Before I get into that, let’s look at the U.S. Dollar vs Oil Price chart: 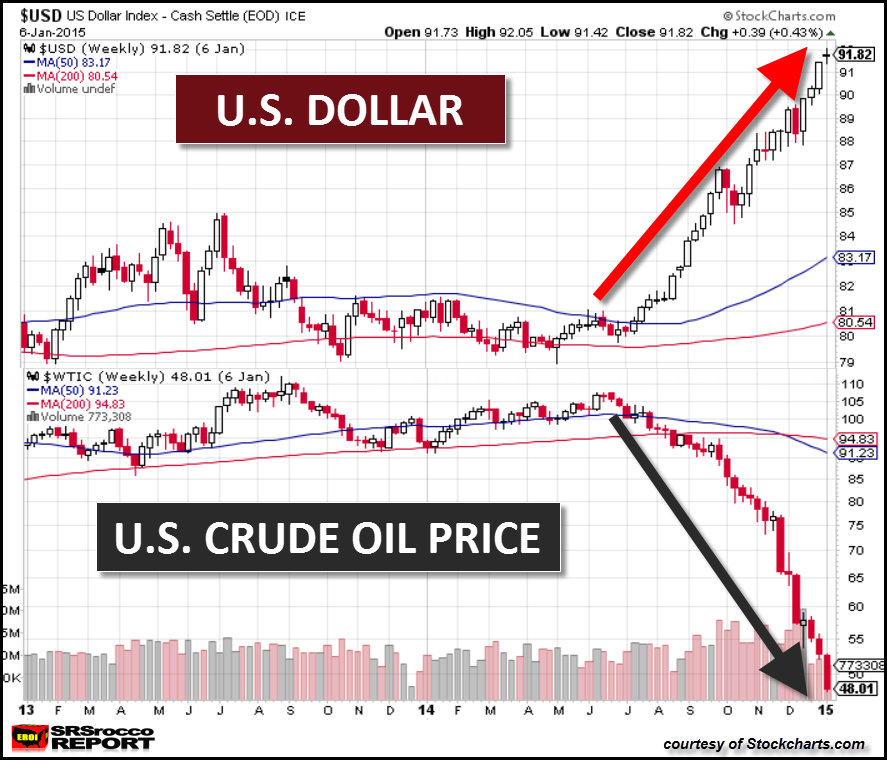 What a perfect MIRROR IMAGE… the price of oil declined in exact opposite fashion as the rise in U.S. Dollar index.  This is one of the benefits of being the world’s reserve currency.  Not have the U.S. sanctions on Russia impacted the Russian and European economies… it’s also wreaking havoc on Middle Eastern and other oil-producing nations.

According to the IEA’s December OMR Report:

So, what we have here is a typical DOMINO EFFECT set off by the U.S. sanctions on Russia.  I believe if the United States didn’t meddle in Ukraine or apply sanctions on Russia, economic activity and oil demand would have remained strong… along with the price of oil.

How about China?  Some believe the weakening Chinese economy is to blame for a fall in oil demand.  Again, according to the IEA, China is forecasted to consume 10.3 mbd of total oil products in 2014, up from 10.1 mbd in 2013.  This turns out to be 100,000 barrels a day less than the 10.4 mbd, the IEA forecasted at the beginning of the year.

So… while China is consuming less than expected, it’s only one-fifth of the 500,000 barrels a day of lost global demand forecasted by the IEA in May of 2014.  Regardless, global oil demand continues to increase even though its less than previously forecasted.  This is a much different situation than FALLING DEMAND as we experienced in the second half of 2008.

Furthermore, the IEA forecasts that global oil demand will continue to increase in 2015 at 900,000 barrels per day more than 2014… even with the downward reversions due to weakened economic activity and geopolitical factors.