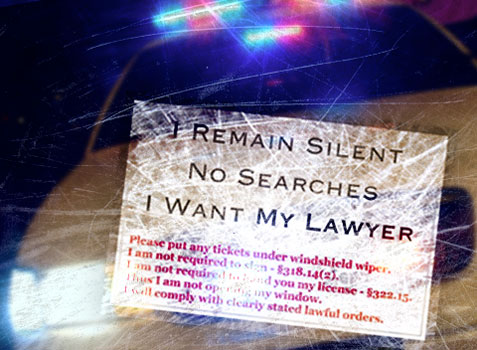 As DUI checkpoints have become widespread on roadways in nearly every state across the union, controversy has grown over the extent of police powers and where the line is drawn on an individual’s constitutional rights.

While police may be searching for evidence randomly from everyone on the roadways in the name of public safety, you do not have to be caught up in their sweep. Violations of your Constitutional rights are unlawful, and you do NOT have to comply with unlawful requests. You do NOT have to talk to police. Know your rights and protect yourself from potential abuse.

Here’s how one guy got through a DUI checkpoint in Florida without a word to police – and hanging THIS inside his window:

The flyer was created by the Fair DUI project, who have several state-specific versions of the flyer which include the relevant code concerning the upright window and the display of license, registration and insurance.

This flyer, in large, bold letters, is displayed (best with tape) to the inside window for police to see, along with any required documents:

“I REMAIN SILENT.
NO SEARCHES.
I WANT MY LAWYER.”

Clear enough for any LEO upholding and honoring their oath to the Constitution.

As the video explains:

“You do not have to roll your window down. You do not have to talk to them at all. That is the best way to go through a DUI checkpoint. A lot of people start talking to the cops, they want to debate with the cops. That’s a bad idea. As soon as you talk, they can say your speech is slurred, and lie and say your speech is slurred. As soon as you crack your window, they can lie and say they smell alcohol or other types of drugs emitting from the vehicle. The best thing to do is go through it, windows rolled up, doors locked, and put the Fair DUI flyer out there with your license, insurance and registration on display.”

The website also urges people to film everything that happens during the police encounter for documentation, should any rights violations take place, or further incident occur. There is also a book with further information.

Jeff Gray, who operates the “Honor Your Oath” YouTube channel where the video was posted argues:

“It is vital to the preservation of liberty for us to know our rights, to assert our rights, and to document the actions of public officials… My goal is to teach citizens that our rights do still exist, and to show how to assert those rights.

Stay cool, Be polite, Flex Your Rights, and Always Film The Police.“

But, what if you have nothing to hide, and have done nothing wrong? Isn’t it easier just to comply and be on your way?

That mentality is how a free society becomes an enslaved one. The police state is clearly already here, and feeding the beast is not a good idea if liberty is to endure.

The reasons these rights were established on paper in the first place during the founding of the United States are due to historic tyrannies of overreaching and arbitrary powers that resulted in systematic and widespread abuse, not only of individuals who actually warrant suspicion and investigation, but of the general people.

Today, it is still very relevant. There is commonplace disregard for the 4th and 5th amendments, which, among other things, guard against unwarranted search and seizure and being compelled to witness against oneself.

But that is exactly what is happening at checkpoints and traffic stops. Police are actively investigating each person they stop, whether they have something to hide or not, and essentially fishing for any evidence that could lead a violation or arrest, creating revenue for the system.

And most of the evidence police have is volunteered by those who do not know or do not exercise their rights. But those who have ‘done nothing wrong’ and ‘have nothing to hide’ believe it is better to do what they say, even if it is unreasonable or unconstitutional.

And while drunk driving is a danger to public safety, it is hardly the real reason that cops are out in force on the roadways. That is merely the pretext, and it it may or may not apply to the driving being apprehended.

It does not better society, and is not the act of a good citizen to make the work of the authorities easier by answering any request; compliance is literally enabling the police state rising up around us that assumes guilt until innocent is proven, and disregards the Constitution and Bill of Rights.

Such a government, though the actions of its officers, is assuming undue power. It is not good government, and will stop at nothing to control the population.

Our rights, inherently given by God and not granted by government, include (but are NOT limited to) –

The right of the people to be secure in their persons, houses, papers, and effects, against unreasonable searches and seizures, shall not be violated, and no warrants shall issue, but upon probable cause, supported by oath or affirmation, and particularly describing the place to be searched, and the persons or things to be seized.

No person shall be held to answer for a capital, or otherwise infamous crime, unless on a presentment or indictment of a grand jury, except in cases arising in the land or naval forces, or in the militia, when in actual service in time of war or public danger; nor shall any person be subject for the same offense to be twice put in jeopardy of life or limb; nor shall be compelled in any criminal case to be a witness against himself, nor be deprived of life, liberty, or property, without due process of law; nor shall private property be taken for public use, without just compensation.